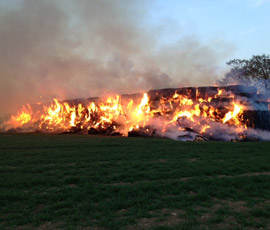 Arsonists have destroyed about 2,000 straw bales in a massive blaze at a farm in Hertfordshire.

Flames could be seen lighting up the sky several miles away after the bales, worth an estimated £60,000, burned at Warren Farm, Braughing, Ware.

Arable farmer Charlie Rand, 37, had baled the straw for land owner Colin Wootton and left the bales ready for collection on a field at least 300m from any public road and nowhere near any public right of way.

But police believe the straw was deliberately set on fire and they have launched a joint investigation with the fire service.

The straw was due to be collected and taken to Ely Power Station – the world’s largest straw burning power station – as part of a green power project.

But now all that remains is a large pile of ash, which insurers have been left with the unenviable task of clearing up.

He described the fire as “mindless thuggery” that caused huge disruption to both him and Mr Rand.

“We have been straw baling for the green agenda, but it makes you wonder whether it’s going to be worthwhile when people set fire to stacks like this,” said Mr Wootton.

He added: “People don’t realise that a farmer’s field is an open-air factory – it’s not a playground.”

“We keep these straw bales away from the public for a reason. If people go and crawl near 600-700 bales and one falls on them, it will kill someone,” he said.

A spokesman for Hertfordshire Police said fire crews took a number of hours to put out the fire on the evening of bank holiday Monday (6 May).

He added: “Sometime between 7pm and 8pm on Monday 6 May, an offender or offenders started a fire at the back of a huge haystack by unknown means.

“The fire lasted several hours and destroyed more than 2,000 bales.”

• A 17-year-old from Ware has been arrested and bailed on suspicion of arson.