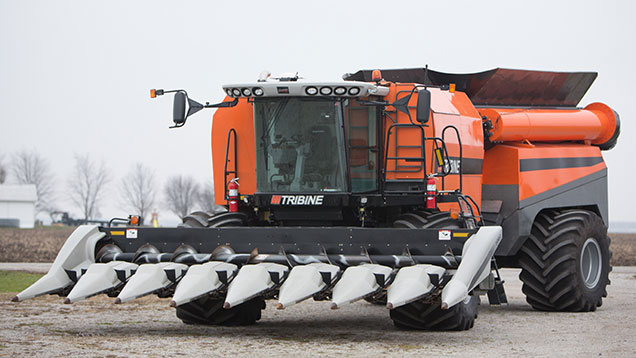 US company Tribine has announced that its articulated combine is to go into production.

This will house the engineering and administrative offices of Tribine Harvester, as well as final assembly, testing, and shipping.

Assembly will begin in January 2016, says the company, and the design is said to be the first new combine architecture since the 1940s.

Designed by Indiana farmer Ben Dillon over the past 15 years, it marries a more-or-less regular combine with a giant 27t chaser bin.

That is more than double the payload of the biggest combine tank on the UK market.

The front half of the Tribine is essentially an Agco Gleaner S77 rotary combine with the grain tank removed and replaced with a 370hp engine.

Clean grain passes from the front threshing module to the rear tank module via a 30cm-diameter auger.

Chopped straw and chaff blasts out in the space between the two modules, helped by a powerful set of hydraulic fans.

Because the machine is articulated and can turn 30deg to either side (as well as being able to crab steer), the rear section can get somewhat closer to a trailer than is normal.

Overall length is 10.6m – less than some regular combines – says the company.

Transport width is said to be 4.4m, which is OK for the US, but somewhat on the wide side for UK roads.

A 56cm-diameter, 7m-long two-section discharge auger, set at just less than 45deg right at the back of the machine, can empty at a rate of 13.5t/min, allowing the whole 27t tank to be emptied in just over two minutes.

Extensive use of aluminium panels has kept overall weight down, but the whole unit when full weighs 45t – about the same as a big combine.

A set of huge 1.2m-wide, 1.8m-tall tyres is said to give less compaction than a standard combine, let alone a 200hp tractor pulling a 27t chaser bin.