BASF offers renowned and innovative fungicides, herbicides, insecticides and growth regulators for agriculture. Our products and services help farmers increase their yields and optimize the quality of their products.

2021 was a challenging year for effective Septoria control. Disease did not enter the majority of crops until after T2 applications were made, which meant that these  applications were protectant on leaf 2 and the flag leaf.

This is not normal at the T2 timing, as most seasons require curative activity from T2 fungicide applications as leaf 2, in particular, has been exposed for several weeks before T2 applications are made .

Complicating this is the trade-off between curativity and longevity of fungicides, with the quickest acting (most curative) active ingredients often lacking longevity of protection.

Revystar® XE sets the benchmark for curative Septoria control. Its fast uptake leads to outstanding curative power and protection against variable weather and its inner-leaf reservoir delivers long lasting efficacy, a feature highly valued in 2021 where Septoria protection was required a number of weeks after application was made.

Pat Thornton farms in partnership with his father at Low Melwood, in the Trent valley in North Lincolnshire. Pat says, ‘working smart’ is always at the forefront of his mind: “Be happy with the investments that you make, make sure there is a definite return and keep an eye on the detail.”

He is an advocate of very regular crop walking to ensure using the right products at the right time. 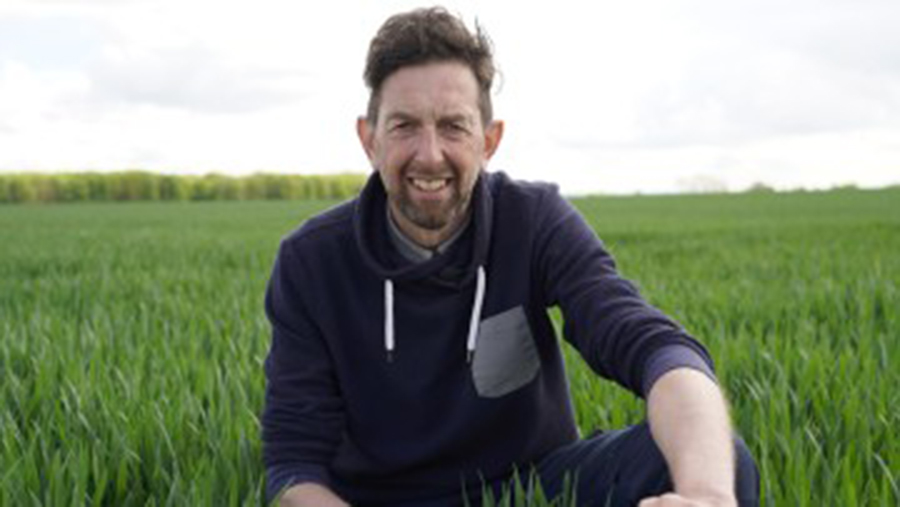 In order to minimise the risk in his wheat crop, the starting point for Pat is varietal resistance. Pat finds the ability to see local data at BASF’s Rawcliffe Bridge variety trials hugely beneficial and whilst there is a clear varietal resistance effect on the financial loss to Septoria, the most resistant varieties still benefited from the recommended dose rate of Revystar® XE in 2021.

Pat is part of BASF’s Real Results Circle, he said, “Real Results has been a huge bonus for me. It has provided access to new chemistry early and in a safe learning environment which has enabled me to find the best way to invest in a crop.”

Last season Pat’s BASF Real Results trials investigated how to use Revystar® XE within his fungicide programmes to maximise crop potential in his winter wheat.

The field of LG Sundance was drilled after a failed crop of oilseed rape and the whole trial received a standard T0.

There were 3 comparison programmes.

The average measured yield of the field standard was 12.92 t/ha. There was a yield uplift of 0.40 t/ha for programme 2 and 0.45 t/ha for the BASF treatment compared to the standard.

Pat said, “During the dry period there was not a lot of difference between treatments but as disease became more prevalent the Revystar ® XE came into its own.

It was easy to see where it had been applied as there were marked, visible differences.

As farmers we harvest sunshine, so maximising the green leaf area -the solar panels which convert the light to yield, you want to be using the best products out there and in this trial it proved Revystar® XE was the one to do that.”

With grain and input prices high, optimising inputs to push yield and return will be key to profitability this season. Steve Dennis, BASF Head of Business Development, explains: “Fungicides need to be thought of as an investment.

Too often people think of fungicides purely as a cost and forget disease has to be thought of as a cost as well; a financial loss to the crop, and under the current high crop prices there will be a much bigger financial loss from disease.”

Revystar® XE has been consistent in performance over 5 years of AHDB winter wheat trials which showed its market leading benefit particularly in a curative year.

Now, moving into the third year of commercial use, Revystar® XE is the proven innovation fungicide.

The cost of disease and the cost of fungicide has to be looked at together, rather than in isolation.

Mr Dennis said, “As the fungicide rate increases, so does fungicide spend but what we are doing is bringing down the overall financial cost on farm, by reducing the yield lag from disease.

The skill in agronomy is getting enough fungicide on to get the maximum reduction in disease without increasing the cost beyond what is economic.

Lots of effort has gone into finding the optimum dose rate for Revystar® XE. At T2, the BASF  recommendation is 1.0 l/ha, giving robust and reliable protection at this key timing.

Even if you feel disease pressure is a little bit lower don’t be tempted to pull back because although the product will still work you will not maximise the economic return from that crop.”

He cautioned: “Trimming dose rates is rarely wise, and it most definitely doesn’t feel wise in 2022 with current grain prices.

“Keep the dose rate at the recommended rate – the economic risk of going slightly higher than what turns out to be optimal is negligible.

“Going too low, the maximum economic saving you can make is the reduced cost of the fungicide. The financial risk from yield loss due to disease is much more significant .”

Revystar® XE, Revysol® and Xemium® are registered Trademarks of BASF. All other products are those of other manufacturers where proprietary rights may exist. ©BASF 2022. All rights reserved.