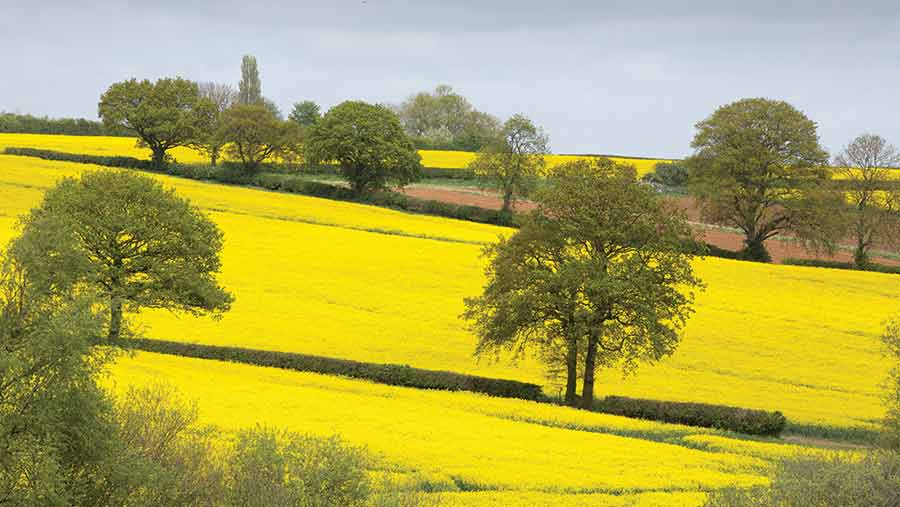 Recently discovered soil-borne pathogens could be partly to blame for reduced yields associated with “oilseed rape sickness” when growing the crop in tight rotations, according to the results of a five-year project.

The pathogens were first identified by a research group back in 2009, led by Peter Mills at the University of Warwick.

“We’ve known for some time from a previous AHDB project that yield falls away as rotations become more intense,” he says. “That drop-off varies from as much as 20% where rape is grown continuously, 12% with a one-year gap and 6% with a two-year gap, down to 3% if there’s a three-year gap between crops.”

While there’s been speculation as to the exact cause of this yield loss, soils and rotations are considered to be the main protagonists, he adds.

“We know that genetic potential, variety choice and climate have been in the crop’s favour in recent years. Despite that, average UK oilseed rape yields have remained at 3.7t/ha and are on a plateau, as with other crops.”

Around 25% of the UK oilseed rape crop is grown in three-year rotations, with a further 25% grown every two years, he reveals. “But both of those areas are rising, mainly at the expense of crops grown on rotations longer than four years.

“Alarmingly, about 5% of oilseed rape is grown continuously.”

In contrast, pyrenochaeta species formed root lesions, resulting in delayed flowering and having a negative impact on seed quantity and quality.

“Laboratory work helped to show how these root-borne pathogens affect the host plant,” says Mr Norman. “The next stage was to understand how widespread they are, and whether their levels in soil can be managed.”

As a result, the project set out to look at the geographic distribution of the two pathogens in England, any potential differences in varietal resistance or susceptibility and the effect of management practices, including fungicide use.

“We found that both pathogens are present in almost all of the areas that oilseed rape is grown, with greater concentrations of the pathogen occurring where oilseed rape is grown more frequently,” reports Mr Norman. “So they are widespread already and occur throughout the UK.”

A close look at soil type showed that there were differences in pathogen distribution in calcareous soils – with pyrenochaeta being favoured by these soil types, while olpidium was hardly found.

“We also observed that there was more pyrenochaeta in alkaline soils – so theoretically reducing soil pH might help the decrease the abundance of this particular pathogen, but it isn’t really practical.”

DNA sequencing by Harper Adams staff to identify the pathogens showed that there are also many others found in the soil, with no obvious relationship between their presence and rotation length.

“As you would expect verticillium wilt was one of these, as was rhizoctonia.”

However, variety work on both hybrid and conventional types, done in conjunction with Limagrain, failed to reveal any varietal tolerance or resistance when they were grown at both high and low infection sites.

“There seems to be no relationship between variety performance and infection,” notes Mr Norman. “Location and rotational intensity explained more, as these factors affected pathogen abundance. The influence of location is likely to be due to soil type.”

Fourteen different fungicide treatments were tested over two years at four sites, two of which had grown oilseed rape for three years prior to the trial. As well as autumn and spring applications, some plots were incorporated with fungicides prior to drilling.

“Nothing worked,” reports Mr Norman. “Fungicides had no consistent effect on pathogen levels – although there was some indication that metconazole had a small effect on some sites, but it wasn’t significant.

“Azoxystrobin also had an inconsistent effect and on some sites led to yield decreases, as it controlled other soil fungi, allowing olpidium and pyrenochaeta to proliferate.”

Given the project’s findings, at least a three or ideally a four-year break is the best practice with oilseed rape, he advises.