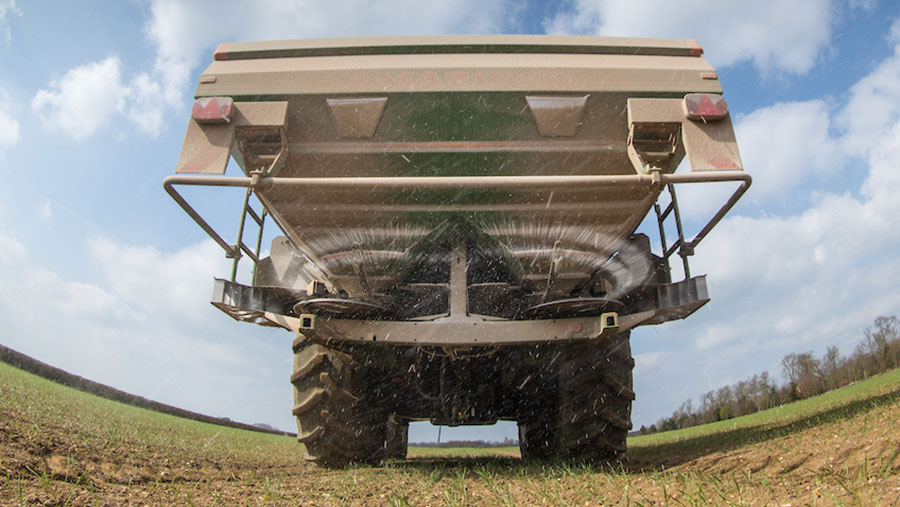 “Modern varieties have been bred for high yields while still maintaining low grain nitrogen levels for the maltsters,” he says.

The British spring barley area is set to rise 17% this season due largely to the fall in winter oilseed rape plantings, with most of the barley increase likely to be in central England, from Lincolnshire through to Warwickshire.

The spring malting barley market for brewing targets grain nitrogen of below 1.85% and is dominated by varieties Propino, Planet and Irina, whereas the distillers look for grain below 1.65% nitrogen and the top variety is Concerto, with Laureate seen as meeting both markets.

Mr Downing says trials have shown that increasing nitrogen rates from 125kg/ha to 175kg/ha resulted only in a 0.1% rise in grain nitrogen, and all grain came well within brewing malting standards.

Some growers are already using levels of 160-170kg/ha of nitrogen to achieve high yields, but the 10-year average for the nationwide spring barley crop is just 104kg/ha.

“Maybe this gives growers the chance to chase more yield, as nitrogen is needed to build yield,” he adds.

Spring barley growers should be looking at the history of their nitrogen use and final grain nitrogen to assess whether they are putting on enough fertiliser as they aim for crops of more than 800 ears/sq m to give a yield of 8t/ha, according to Mr Downing.

Furthermore, he advises growers to divide their nitrogen applications, suggesting either a two-way or three-way split.

The two-way split should be in the seed-bed and at the three-leaf stage (GS13), while the three-way split also includes an application at the start of stem extension (GS30-GS32).

In a trial using 130kg/ha of nitrogen, putting all the nitrogen on the seed-bed in one application yielded 6.96t/ha, while increasing the applications to a 50:50 two-way split yielded 7.26t/ha.

In addition to nitrogen, phosphate is key in the seed-bed, along with potash, as phosphate plays a huge role in encouraging rooting and rapid development, says Mr Downing.

“Nearly all spring crops will benefit from fresh phosphate, irrespective of how much phosphate is in the soils,“ he adds.

His trial work shows using 65kg/ha of phosphate gave a yield boost of 0.65t/ha, worth nearly £60/ha, even with a soil phosphate index at a high 3.6 level.

Mr Downing was speaking to Farmers Weekly after giving a presentation to a Frontier regional growers briefing.