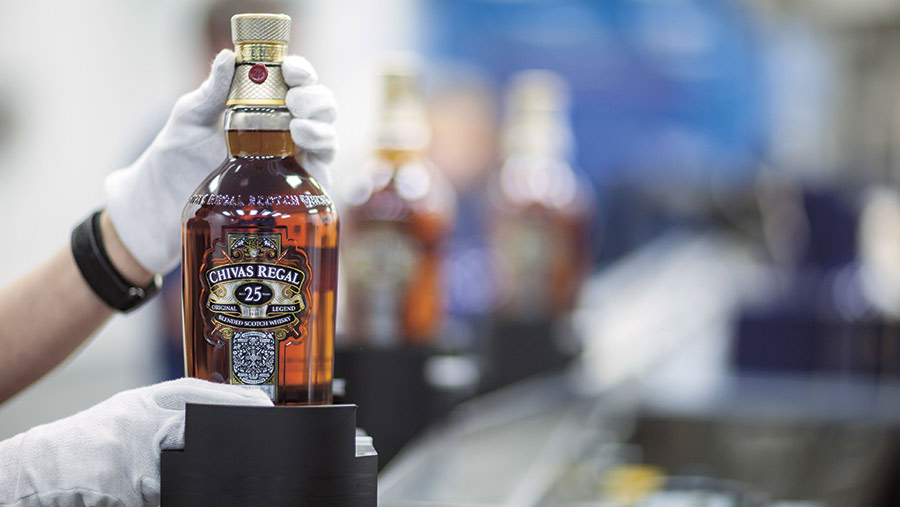 Norfolk spring malting barley growers are tapping into the increasing thirst of the Scottish whisky distillers and earning a premium over crops aimed at the brewers.

As additional suitable light barley land becomes scarce north of the border, the traditional malting barley lands of East Anglia are filling the gap and growers are earning £10/t more than grain destined to make beer.

With Asian demand fuelling the rising demand for Scotch whisky, boatloads of malted barley are heading out of King’s Lynn and Great Yarmouth to make the likes of Johnnie Walker and Chivas Regal whiskies.

Andrew Murdo is helping to meet this demand, producing over 1,250t-plus of spring malting barley each year for the distilling industry on the abrasive sandy Norfolk loams which he manages.

“The premium makes it worth growing. The spring malting barley crop is a consistent performer and is not difficult to grow,” he tells Farmers Weekly.

Mr Murdo is growing the specialist distilling spring barley variety Concerto preferred by the whisky makers to give a grain nitrogen content of under 1.65%, while brewers look for a less demanding grain nitrogen of below 1.85%.

Concerto malting barley is trading at £152/t for March delivery, compared with brewing varieties at about £140/t and feed barley down at £115/t.

Mr Murdo budgets for a yield of 5.5-6.5t/ha and in a good year, such as 2014, yields can hit 7t/ha. He says it is simply the most profitable spring cereal he can grow on his free-draining soils, and outperforms other crops such as spring beans.

His yields largely depend on spring and early summer rainfall on this light land, and he looks to drill the crop as soon as soil conditions are suitable in the spring.

His 200-240ha of spring barley fit well into the rotation as it follows either late-lifted sugar beet or a second successive cereal, such as winter barley, in a cropping rotation which also includes winter wheat, oilseed rape, maize, rye, beans and carrots.

His 400ha of winter barley includes the specialist malting varieties Maris Otter and Flagon destined for the craft brewers, while the spring area is all down to Concerto destined for the distilling industry.

“We grow what we can sell and we would not drill a crop unless we were sure it had a home,” he adds.

Establishing the crop is relatively inexpensive on his light land with a plough and press soon followed by a Vaderstad drill.

The plough is used routinely across the farm to get air into the soil which can easily slump in wet weather.

A relatively high seed rate of 180-220kg/ha is used with the aim of achieving 350 seeds/sq m, as Concerto is a relatively low-tillering variety compared with higher-tillering ones such as Opera, Octavia, and Sienna.

Drilling can start from mid-February onwards, but Mr Murdo says soil temperature and weather are more important than sticking rigidly to the calendar.

The farm has moved over to using liquid nitrogen fertiliser for great accuracy, and a total of 110kg/ha is applied – 70kg/ha just after drilling and the remaining 40kg/ha some 4-5 weeks later at the three-leaf stage.

He is not tempted to increase nitrogen to chase yield, as he is fearful of the crop falling over and it not meeting the 1.65% maximum grain nitrogen specification.

He has been growing Concerto since 2010, and is pleased with its performance and it is certainly a big improvement on his previous variety Cocktail which was susceptible to brackling, or the barley heads snapping off near harvest.

“Concerto has done really well, it is consistent and we are happy with the demand for the variety,” he says.

“We have seen an increased demand for malting barley in East Anglia from the Scottish distillers, especially so in the past five years,” Mr Adams says.

He adds that at least 75% of his spring barley seed sales this season are for Concerto in his trading area, illustrating the strong demand coming from Scotland. 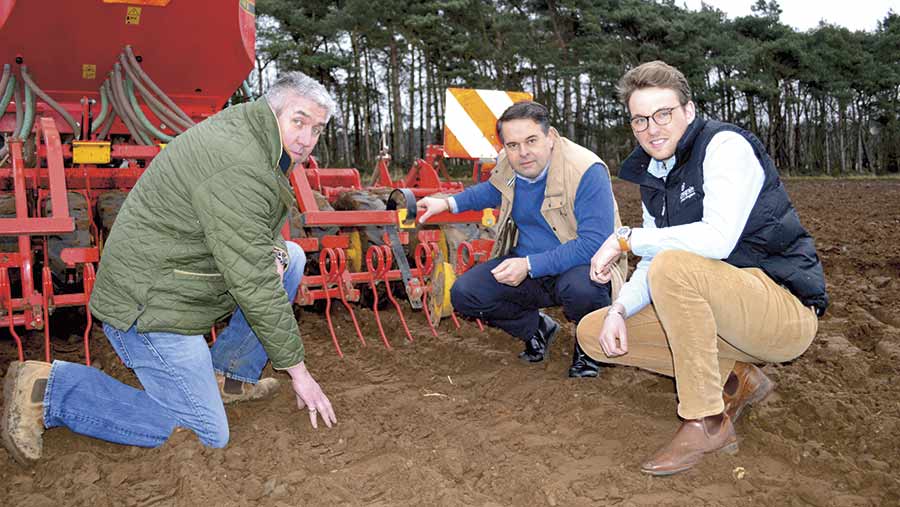 However, he is concerned there will not be enough barley drilled this spring for distilling as a mild and open autumn allowed for the late drilling of winter wheat well into November and December.

His company is one the two merchants and as well as H Banham who supplies about 100,000t of winter and spring malting barley to Crisp Malting Group as part of the ABC (Adams-Banham-Crisp) group of 220 growers.

“We think Concerto will stay popular and we may see another of our varieties Opera as a useful future replacement,” he says.

Opera, also from Limagrain, shows higher yields than Concerto and is seen as a dual purpose variety for distilling and also for brewing. The most popular spring barley varieties for beer making are Propino and Planet.

He cautions that Opera will only achieve Institute of Brewing and Distilling (IBD) approval by May 2018 at the earliest so it may take time for the maltsters to accept the variety.

The Scottish spring barley area is expected to be down in 2017 as more winter barley has been drilling in south and central Scotland and due to the EU’s three-crop rule.

In addition, there is little spare capacity in the Scottish malting industry, so it makes sense to malt English-grown barley and ship it northwards.

Bob King, commercial director at the Crisp Malting Group based in Norfolk, says malted barley is increasingly being shipped up to Scotland to feed this growing demand.

“There is more demand for distilling malt in Scotland as there is little spare Scottish malting capacity,” he tells Farmers Weekly.

Mr King is expecting a smaller Scottish malting barley crop this season and although there should be a good quantity of spring barley in England, the malting quality could be variable as the crop is expanding into non-traditional areas.