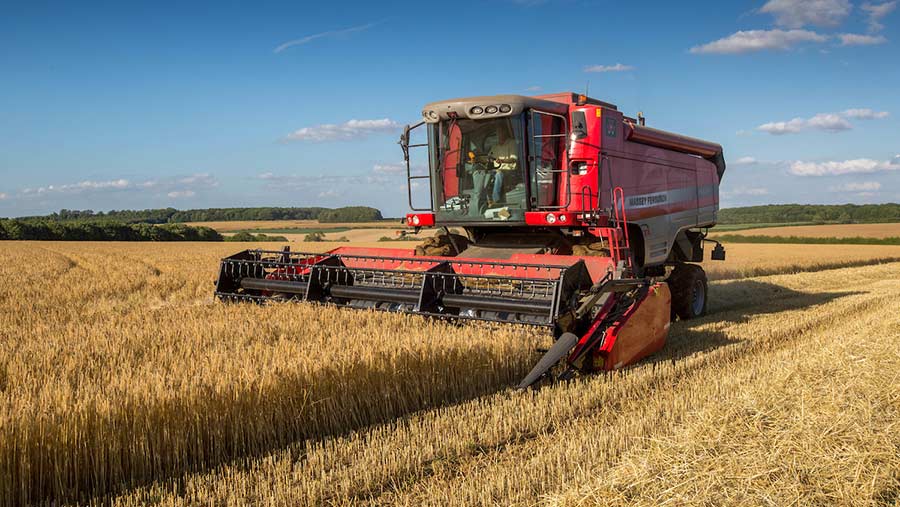 The winter feed barley market is challenging at present, with a £20/t discount to feed wheat making its margin less appealing as a second straw.

Despite the economic case against the crop, experts agree its rotational benefits will keep it in most cropping plans and variety choice can help ensure returns are maximised next harvest.

The winter barley area has seen upticks for several seasons, but the AHDB predicted this would come to an end in its last winter planting survey, with a 2% drop in England and Wales for harvest 2017 expected.

See also: How to get double-digit wheat yields on wet land

This has in part been caused by the surge in spring barley, as growers look to control blackgrass or address the challenges associated with oilseed rape, inevitably putting pressure on the feed barley price.

In such market conditions, he believes, it is important to consider specific weight when selecting varieties grown for selling off-farm, with the quality benchmark a make-or-break for getting into both domestic and export feed markets.

“You have to have the specific weight to compete in feed rations and it could help tip the balance in your favour,” he adds.

Niab Tag cereal variety expert Clare Leaman agrees that growing a marketable sample is a safer bet in the open market and is something that has maintained two-row variety Cassia’s share of the seed market.

From breeder KWS, it has the best specific weight, at 70.5kg/hl, and is the only variety above 70kg/hl on the Recommended List.

“It is something growers are reasonably well educated on, but there are some differences in the range of varieties and some are better than others, so it is definitely something to keep an eye on,” says Mrs Leaman.

“The six-row feed varieties have traditionally had lower specific weights, but both the hybrid and conventional choices are now much better and in the same ballpark as the two-rows,” she adds.

In addition to specific weight, the spotlight will also be thrown on to the lodging scores in cereal varieties this season, as heavy rain and strong winds during late June flattened crops across the UK.

Damage from lodging can be huge, with yield losses shown to be as high as 75% in affected crops and in the worst years 10-15% of the cereal area can suffer.

Almost all winter barleys on the Recommended List are scored between 6 and 8 for lodging resistance (with 1 being poor and 9 being the most resistant) and Mrs Leaman suspects these scores might spread after this year’s assessments.

“Most varieties have come through [the trials system] without a bad lodging year, so any data hasn’t been gathered under high-pressure conditions,” she says.

“There will undoubtedly be more interest in lodging [this summer] and we should get some good data to firm up the ratings.”

By mid-July, lodging assessment data should be widely available and Mrs Leaman suggests that growers review the performance of their existing and potential new varieties.

“See if your choices can be improved and consider your PGR [plant growth regulator] regime and whether that can be adjusted to ensure you are doing the best possible job,” she adds.

Just one new variety joined the two-row winter feed barley line-up on the 2017/18 Recommended List, but the seed trade doesn’t expect it to take significant market share this autumn.

He sees Tower commanding 22-23% of the seed market, followed by Glacier and Cassia at 12% apiece across the UK.

“Glacier will fall back a bit, mainly to the benefit of Tower, as it isn’t quite as stiff and this year has seen some lodged winter barley crops in certain areas,” says Mr Barker.

Behind the top three, top-yielder Orwell is expected to pick up about 7-8% of the market, while Limagrain variety California is expected to maintain its popularity in the West and claim 3-4% market share.

This is driven by its tall, stiff straw, which is ideal for mixed farms, and its consistent performance since its 2013 recommendation, says Mr Barker.

“A variety that might also find a niche in the mid-West region is Surge, which could pick up 1-2% nationally, but I would expect Infinity largely to disappear as it doesn’t add any different characteristics over the established varieties,” he says.

Hutchinsons seed manager David Bouch sees a similar trend, with sizeable chunks of Tower, Glacier and Cassia going into the ground. He tips Orwell and Surge as options for those looking to switch.

Mr Bouch says Surge has a better overall agronomic package, with higher disease resistance scores to all the main threats – including two 7s for net blotch and rhynchosporium – but its weaker straw strength requires attention.

“You need to be prepared to apply a good PGR programme, but its untreated yield is better than Orwell and for disease management it gives you some flexibility and peace of mind when conditions aren’t in your favour.”

Scottish Agronomy’s Greg Dawson says Tower – and more recently Orwell – have become popular choices in Scotland and growers will be looking for improvements in new material before making any switch.

Despite new variety Creswell’s higher northern yield of 106%, as a package Mr Dawson sees it as a sideways shift from Tower and Orwell, rather than a step up, and doesn’t think it will gain too much ground.

He adds that the perennial Scottish problem of rhynchosporium is a critical consideration for variety selection and is urging growers to move away from the 4-rated Glacier and on to Orwell.

“There is a very big difference between a 4 and a 7, and Orwell has a better score at 6,” he adds.

Two-row malting markets are predominantly contract-driven and about 90% of the market is taken up by Venture, but Mr Bouch says Craft may take some of this share after it was given provisional approval for brewing by the Institute of Brewers and Distillers (IBD).

“It is certainly worth considering, as its yield is ahead [of Venture] and consistent across the regions. Agronomically it’s cleaner and has better lodging resistance, too,” he adds.

Two new six-row winter feed barleys have been added to the Recommended List this year and both are attracting attention in the North.

Winter barley is a relatively small crop in Scotland in comparison with its spring-sown counterpart, typically grown as a reliable early entry to oilseed rape or for feeding stock on mixed farms.

Conventional six-row varieties have been a mainstay, preferred to hybrids for cheaper seed costs and more flexibility for adjusting seed rates upwards when drilling is delayed.

KWS variety Meridian has been popular in recent years, says Mr Dawson, but newly recommended six-row conventional Funky is attracting the attention for its higher yield and early maturity – a key agronomic factor in the North.

“Its specific weight is good, too, which could be an advantage if you want to get the grain off the farm,” he adds. “We have guys looking at it this year [harvest 2017] and there is definitely interest for this autumn,” he adds.

After some early adoption in Scotland when the first hybrid barley was introduced, hybrids fell out of favour for their perceived lower specific weight and less wriggle-room on seed rates, compared with conventional two- and six-row types.

The variety is also early maturing, has good grain quality and a score of 7 for rhynchosporium, so it ticks several boxes for northern growers.

Mr Dawson says that with Meridian – which has a strong all-round disease-resistance package, including a 6 for rhynchosporium – growers cut back from three fungicides to two. He believes growers may also be able do that with Sunningdale in the right season.

“You could save a pass with the sprayer and although you won’t make the difference in seed cost back in saved fungicide cost, it will add yield,” he adds.

Further south, the six-row feed market is dominated by hybrids and Mr Barker expects to see a further increase in their market share of the overall winter barley area this autumn – currently 30%, according to Syngenta estimates.

The area is predominantly top-yielder Bazooka at about 60-70%, but seed is likely to be sold out at the time of publication, so those still in the market for hybrid seed will have to look to Belfry, Sunningdale and Volume.

Syngenta seed campaign manager Mark Bullen says there is plenty of seed remaining for all three and adds that Sunningdale isn’t confined to the North: its UK yields are on a par with Bazooka and it is worth considering nationwide where Bazooka is unavailable.

Hutchinsons and Procam also have an exclusive distribution agreement for hybrid candidate Libra, which – although it is slightly off the pace for yield – has unrivalled grain quality for a six-row variety, explains Mr Bouch.

“It is better than the two-rows for yield, but has a specific weight in the same ballpark as Cassia [69.9kg/hl] and will give some assistance when it comes to marketing the grain,” he adds.

One Nottinghamshire farm business will see a drop in its winter barley area for the third successive year this autumn, with the remaining acreage set to be drilled with hybrid variety Bazooka.

Epperstone-based JS Peake & Sons manages just shy of 500ha of combinable crops and sugar beet. Back in 2015 it was growing a 150ha mix of Glacier and six-row hybrid winter barley Volume for blackgrass suppression.

This year the area is down to 67ha of the high-yielding hybrid Bazooka and farm foreman Alastair Baseley says he is going to stick with it again this autumn, as it hasn’t yet been superseded by any new additions.

“I visited [breeder] Syngenta’s stand at Cereals and they explained that the other new variety, Sunningdale, is one for growers further north, so it is best to stick with what we’ve got.

“Bazooka yields well, has good, stiff straw and it’s clean, too, so gives us the chance to save a bit on chemicals,” explains Mr Baseley.

Just 32ha of Bazooka is pencilled in for this autumn, with forage maize and energy rye coming into the rotation after the opening of Seven Trent’s local anaerobic digester provided an outlet for the two crops.

Both are more lucrative than winter barley and add some firepower to the farm’s fight against blackgrass, with rye competitive and removed before the weed sheds seed, and maize drilled later in the spring, allowing plenty of out-of-crop control.