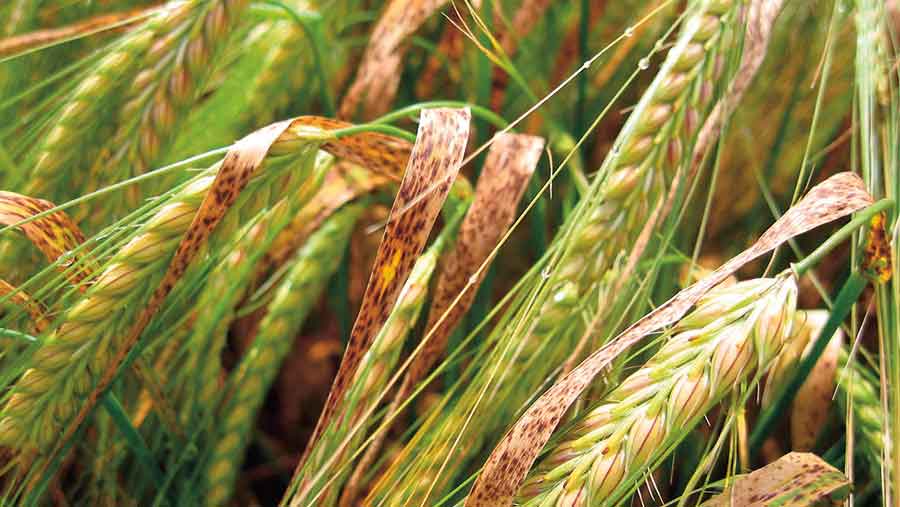 The barley disease ramularia is potentially resistant to three key fungicide groups according to recent findings in Germany, which could be a warning to UK growers about the threat of resistance developing in this country.

Resistance testing in southern Germany by the agrochemical group Bayer has confirmed the presence of two new mutations. One has an effect on the performance of SDHI fungicides, and another affects azole fungicides.

Resistance in ramularia to a third group of fungicides, the strobilurins, has previously been confirmed.

The mutation discovered in the target site for azoles has been found to severely affect the performance of all actives in this group.

This is unlike the mutations to azoles found in septoria in wheat crops, which incur a loss in sensitivity resulting in a slide in efficacy, rather than a significant drop in performance.

In addition, the SDHI mutation has led to full resistance to all members of that fungicide group.

Where these mutations have been found, no SDHI or azole fungicide will now control ramularia, even when used at full rates. It leaves the multisite protectant fungicide chlorothalonil as the only effective chemical option for control of the disease.

The German authorities are now advising the use of chlorothalonil in all applications in barley.

However, the position in the UK is not clear. Unlike in Germany, where field performance was compromised last season in some cases, no such problems were reported in 2016 in the UK.

In field trials where ramularia pressure was high, Bayer says a programme of its SDHI-azole product Siltra (bixafen + prothioconazole) and chlorothalonil gave greater than 90% control.

Bayer is awaiting the results of the UK samples from 2016 and will provide an update once it has received them.

Last season, ramularia was particularly severe in mainland Europe, and more of a threat in the UK because of the cold, wet June.

However, while the disease is often seen in Scotland and parts of England, it isn’t usually a big issue for many barley growers.

Other diseases, including and especially rhynchosporium, net blotch and brown rust, are key threats to barley crops and also need to be controlled, so using a well-timed programme is the most effective way of protecting crops, says Bayer.

The group advises using a programme based on the azole prothioconazole, a SDHI and/or a strobilurin at robust rates.

The use of chlorothalonil at the T2 timing will give the best boost to ramularia control, and help protect other products where ramularia is sensitive to other chemistry, it adds.

For future years, using cultural controls for ramularia, such as avoiding the use of farm-saved seed from crops that had ramularia infections and using more resistant varieties, particularly in higher-risk areas, will make sense.

Bayer adds that this development also serves as a warning about the need for best practice stewardship of fungicides in all crops.