Moving farms to begin a new farming journey can be challenging, especially when it’s from one corner of the UK to the other.

But that’s exactly what mixed farmer Tom Gillbard and his father, Eric, did when they moved from Devon to the north of Scotland two years ago.

Running a mixed beef, sheep and arable farm about 10 miles from the Scottish coast, east of Inverness, the pair have adapted to their new farming climate and are successfully undersowing spring barley with a clover mulch.

Making the move to northern Scotland

When Tom Gillbard made the move to northern Scotland all his farm stock and machinery came with him.

Growing 70ha of the cereal, he thought this would provide a quick rotational turnaround for some autumn sheep grazing at the 180ha Drum Farm, near Keith.

Starting with the fields closest to the farmyard, he undersowed 26ha with a five-year grass mix, incorporating both red and white clover.

He hoped the carpet of clover would provide a successful overwinter soil cover and mitigate any wheelings from a late harvest if the weather took a turn for the worse.

If successful, this would also allow for a considerable reduction in artificial nitrogen use due to clover’s N-fixing traits. 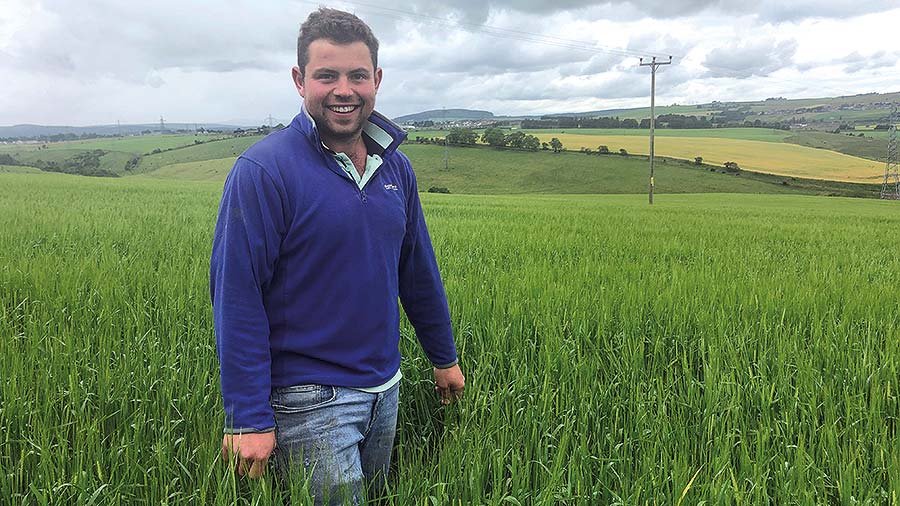 Growing the barley varieties Laureate and a small proportion of Planet, the crop was planted at the very end of March.

Drilling at a seed rate of 230kg/ha using a Kuhn power harrow combination drill, fertiliser was placed alongside the seed in one smooth pass.

A few days later the father-and-son team planted the grass and clover mix at a seed rate of 34kg/ha with a Ransomes Norosten 4m drill pulled by a Massey Ferguson 35X.

“When we moved to the farm, we purchased most of the farm’s existing machinery, including the Ransomes Norosten.

“It was very effective and cheap to run. We were able to plant the 26ha using just four gallons of diesel,” he says, adding that the barley grew away well, and the grass neatly followed.

“The two crops grew together and the clover reached about 30cm high,” he says.

When the crop was ready for the combine in mid-September, Mr Gillbard harvested the grain for crimping, but not in its traditional manner.

He used the combine to take the very top of the ears off, placing the header at the tip of the plant head.

This left the straw, grass and clover behind, which was later mowed and baled to provide a complete forage diet full of protein and fibre for his cattle and sheep.

The grass and clover sward then fully established and, with rapid growth, it was ready to stock sheep just a couple of weeks later.

After a successful start to their trial, a further 10ha of spring barley was undersown this year, which will be ready for harvest at the end of August.

Moving so far north meant a considerably longer growing season, with long daylight hours. In fact, during most of June and July the evenings do not really get dark, with 22 hours of daylight, which results in more rapid crop growth.

“With such fast growth rates, crops can establish and get away, making them more robust to disease.

Coupled with the cooler climate, which is about 3C lower than the South West there is notably less crop disease,” explains Mr Gillbard.