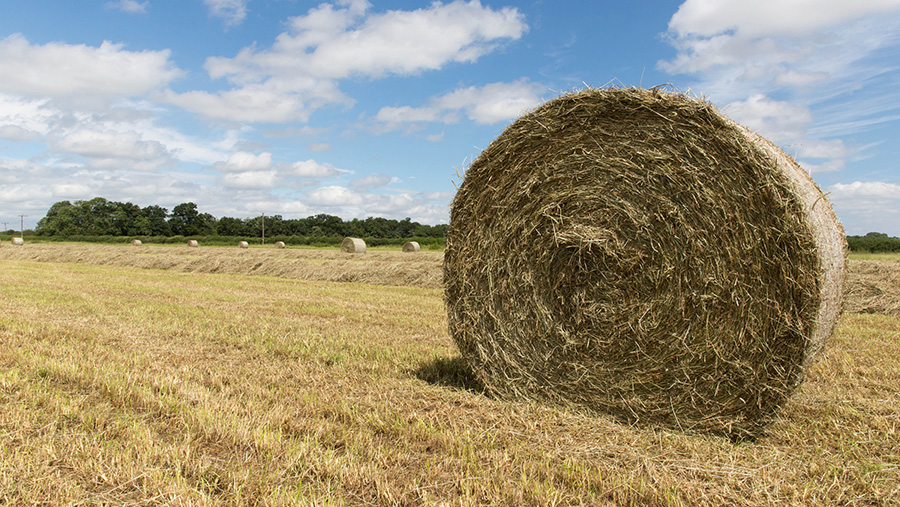 Standing straw prices have typically risen 10-20% on 2015 levels, with buyers seeking to bolster their supplies after last year’s long winter.

Auctioneers report demand has been stronger than last year, with some livestock farmers choosing to lock into a price now, rather than gamble on straw prices later in the year.

Tom Mellor from Greenslade Taylor Hunt in the south-west of England said prices had risen between 10%-20% from last year and there were only a handful of unsold lots.

Winter wheat and spring barley crops had averaged about £45/acre, while winter barley was particularly sought after with the average rising to £65/acre and reaching a top price of £82/acre.

We did expect it to be dearer as the winter was long and so many farmers have been left without much straw behind them Chris Clapham, Stags

Mark Northcott from Symonds and Sampson’s Yeovill office said prices had varied quite widely according to location, but they were all up on last year.

At his first sale of the season, covering an area stretching from Dorchester to Andover, winter wheat had averaged £34.50/acre and spring barley £30/acre, which was £5/acre more than last year.

Winter barley sold for £47/acre which was £12/acre up on the previous year.

“We have seen stronger demand this year as there is very little carry over,” said Mr Northcott.

Chris Clapham from Stags, also based in the South West, said prices had roughly been up £10/acre across the board.

“We did expect it to be dearer as the winter was long and so many farmers have been left without much straw behind them,” he said.

“There is also a lot of caution about managing costs and it seems many have decided they would rather get the straw cheaper in the field, than gamble and pay for it by the load in the winter.”

Elsewhere the picture has been a bit more mixed.

The sale had been slightly more subdued than last year with tight funding meaning some producers were holding off and would buy supplies as they needed them, he said.

The catchy weather had also proved off-putting to some, as they were worried about quality if straw was left lying in the swath.

McCartneys, with offices in the Marches, mid-Wales and the Midlands, said prices had varied from region-to-region with the best prices being achieved closest to livestock.