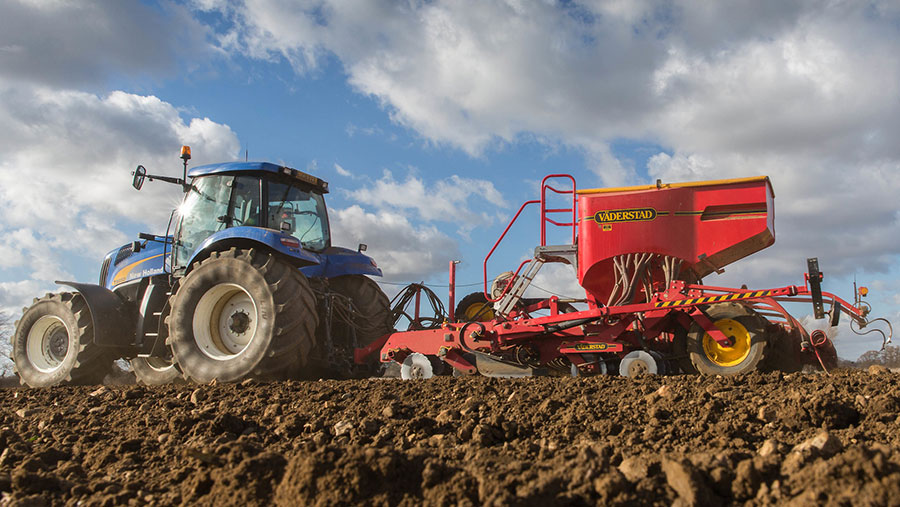 Wet weather is holding up spring drilling across most of the UK with spring barley growers concerned yields may suffer if sowing is delayed into April.

Norfolk farm manager Andrew Murdo says he is a month behind last year and has still not started drilling yet. He has 440ha of spring barley, spring bean and sugar beet to drill as well as 200ha of potatoes to plant.

“Usually we’re well on by now, but we’ve done nothing this year and there’s little prospect of us getting under way this week, it’s incredibly frustrating.

“It’s been wet here since the end of November, so it’s been a long, tough winter, meaning the workload is now immense,” he told Farmers Weekly.

Mr Murdo conceded yields could suffer as a result of the late drilling, but admitted he’s not too worried at this stage, because if the weather was to stay warm between now and harvest, crop can quickly pick up.

He manages more than 2,000ha of light arable land at Wroxham Home Farm, about eight miles north-east of Norwich.

James Beamish, farm manager at the Holkham Estate on the north Norfolk coast is looking to start spring barley drilling this week with 360ha of Concerto and Laureate to drill.

After a light dusting of snow over the weekend, cold easterly winds are drying up the light coastal soils and helping to get the ground ready for drilling.

“The optimum time for drilling spring barley here is 10-20 March. We are not too worried at the moment, but would like to have it in the ground by 1 April,” he said.

His next priority will be sugar beet and there is 270ha to drill on the 3,500ha estate, with the only farm work done so far this spring being applying liquid nitrogen.

Tom Dye, managing director of Albanwise Farming manages two farms in Norfolk and two in Yorkshire, and said his west Norfolk farm started drilling at the start of this week and his north Norfolk farm should be next week.

“It’s the worst spring I’ve see for 11 years in terms of being late, with soils being damp and cold,” he said.

He has 600ha of spring barley to drill on the two farms in Norfolk, with his west Norfolk farm 10 miles south of King’s Lynn at Barton Bendish growing Propino, while the north Norfolk farm at Green Farm, Saxlingham, three miles west of Holt, grows Laureate.

Independent agronomist, Sean Sparling, explained that less than 10% of spring barley has been drilled in Lincolnshire, which is unheard of in his area.

“In 30 years, this is the latest I’ve ever known. Never at this time of year, have I been through Lincolnshire and the barley hasn’t been up in rows,” he said.

With 227mm of rainfall in the area since October, Mr Sparling said the ground has never dried, and explains the soil profile is too wet to plough and in some cases growers can’t even get into fields for standing water.

“I feel it is still too early to panic. Temperatures should pick up and in reasonable conditions, it should be in, up and away fairly quickly – 2011 was a late drilling year, but a very hot summer, resulted in one of the best harvests we’ve ever had, so there’s still hope,” he said.