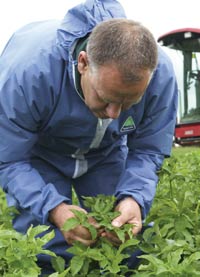 Prospects for growing blight-resistant potatoes created by genetic modification have received a setback in the UK after BASF’s decision to suspend research into such varieties.

The firm is blaming continuing delays in getting EU approval for GM potatoes, saying approval of its GM starch variety remains “lost in the politics” of the EU.

“In the past decade, we have invested over €1bn into GM research,” said BASF’s Tom Wetjen at the Potato Council’s East Midlands Potato Day.

“The European Food Safety Authority has several times concluded that the Amflora starch potato is safe, and yet the variety is still not approved. Now it’s a political decision.”

That left the company unable to recoup any of its investment in Amflora, which produced a special starch for energy-efficient manufacture of paper, textiles and adhesives, he said.

BASF’s blight-resistant potato Fortuna was five to six years away from commercial adoption, with its dossier still to be submitted to the EU.

Blight-resistant genes Rpi-blb1 and Rpi-blb2 from the wild potato Solanum bulbocastanum had been introduced into the parent material. They worked by recognising the Phytophthora hyphae as they invaded plant cells, he said. That triggered early local cell death, which inhibited the fungal growth.

Fortuna had been tested against hundreds of blight isolates, including Blue-13, and found to be resistant. But its yellow flesh made it less likely to be adopted commercially in the UK.

“We have other varieties in the offing – after inserting the resistance genes we need to ensure the variety is stable,” said Mr Wetjen. “But we need a working approval system in place and the clear support of the potato value chain before developing these.”

UK field trials of Fortuna, which were destroyed by protesters in 2007, were completed successfully without any incidents in 2008, he noted.

Reacting to BASF’s move, NFU deputy president and potato grower Meurig Raymond said: “It’s a sad and backward step for the industry and society, especially when you look at the challenges from potato blight.

“The way forward for the industry must be to grow the crop with less fungicide and creating resistant varieties has got to be right.

“I can understand BASF’s reaction and the concern of politicians. But I say to the politicians, this is wake-up time. The rest of the world is using GM to become more competitive and mitigate fungicide use and we’re being left behind.”

Greenvale chief executive Angus Armstrong was also disappointed. “The GM debate needs to continue and we need to prove the science one way or the other. Unless we have a controlled programme of research we’ll never have the answers, and if we don’t have them we’ll be left behind in world potato production.”

“We need all the research we can get. We all want to use less chemical and be more efficient. If GM can help us do that we need to take advantage of it.”