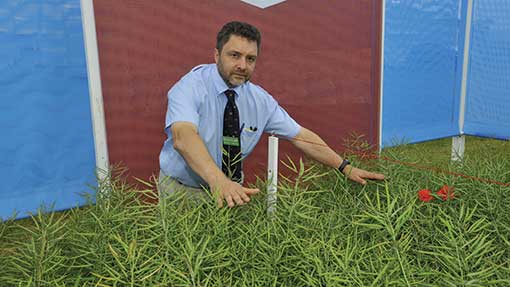 Bayer CropScience’s first winter oilseed rape variety to join the HGCA Recommended List heralds the arrival of a big company, with budgets and ambitions to match, into the plant breeding arena.

And oilseed rape is only one example of what Bayer CropScience is doing in plant breeding, says the company’s Adrian Cottey, who points out that there is also global activity in cotton, rice, soya beans, vegetables and wheat.

“While crop protection drives the current business, we are in the process of doubling our spend on seed and traits. In the next few years the two sectors will be of equal importance to the company.”

This is being done through acquisitions of breeders, breeding programmes and assets, as well as a greater emphasis on research, he explains. “All of which involve traditional breeding, molecular techniques and traits research – both GM and non-GM. ”

Bayer’s first wheat variety is expected in 2015, with Ukraine being the destination.

For the rest of Europe, another three to four years of development will see variety introductions start in 2018-19, predicts Bayer’s Adrian Cottey.

“Longer term, it will all be about hybrid wheat. But they won’t appear immediately.”

Traits that Bayer has identified for its wheat breeding programme include yield stability, nitrogen and mineral use efficiency, drought/heat tolerance and herbicide tolerance, he reveals.

The UK oilseed rape programme started in 2009, following the purchase of the Raps GbR breeding programme, says Mr Cottey. The first successes became apparent towards the end of last year, when the winter hybrid Harper was added to the east and west region Recommended List, and the spring hybrid Dodger joined the spring rape Descriptive List.

But the real breakthrough is expected from 2017 onwards, when there will be hybrids that outperform others, many of which will contain traits that give them a competitive advantage, he says.

“If we look at what’s been achieved in Canada with our InVigor brand, it shows the sort of approach we will be taking in the UK,” he says.

As a result, Bayer has produced the top five selling oilseed rape varieties for almost every year of the past decade in Canada, all of which are hybrids. “There are no conventional varieties left in Canada. That’s because the yield benefit of hybrids is more than 10%.”

Traits, which are a distinguishing feature or quality, are different to characteristics and will be increasingly prevalent in Bayer varieties, he says. “An example is our pod shatter resistance, which has been patented. But there are many more that tend to give a competitive advantage.”

In Europe, the company has two oilseed rape breeding stations, located in Belgium and Germany, from where varieties are selected for individual countries. The focus is on the development of new hybrids, so that traits can be included in the best germplasm and not put into underperforming varieties.

For this coming season, Bayer’s first UK variety, Harper, which was added to the 2014-15 Recommended List, is available. Described as an early, vigorous hybrid variety with excellent disease resistance, it has a gross output of 103% and sits just behind the top yielders. A 9 rating for stem canker makes it of interest.

“This stem canker rating is based on multi-gene resistance,” explains Carol Norris, development manager for seeds and traits at Bayer. “It really differentiates Harper from the other new additions.”

In practice, it means that one phoma spray is sufficient, she adds. “It’s going to simplify farm fungicide programmes considerably and let growers concentrate on getting the light leaf spot timing right.”

Good early vigour is another characteristic of the variety, she says. “And that’s going to be an essential variety requirement without the neonicotinoids.”

Fencer is a candidate winter variety for the east and west region. Another hybrid, it has a gross output of 105% and an oil content of 46%, together with a stem canker rating of 8 and lodging and stem stiffness scores of 9 and 8, respectively.

Rinker, another candidate, is the last of the company’s conventionals. Also on a gross output of 105% and a stem canker rating of 8, it’s an early-flowering, medium-maturity type.

On the spring Descriptive List, hybrid Dodger sits at the top with a gross output of 115%. That puts it 10% above Delight and 9% ahead of Amulet, says Ms Norris, showing the potential that’s on offer. “And Builder, another spring rape, has just been National Listed with a gross output of 120%. That means we’ve had four successes so far.”

Bayer hybrids will be sold via agents, who are most likely to be the farm’s normal seed suppliers, confirms Adrian Cottey.

That means growers will have to accept the company’s terms and conditions when they buy a Bayer variety, he explains, so that the relevant controls are in place for the future.

“We’ll be introducing some patented material and some regulated traits in the years ahead,” he says. “For those reasons, we’ll need to know where the seed is going and who is growing it.”

Future scenarios include the possibility of GM seed sales, meaning that rock solid mechanisms will be essential, he says. “These systems have to provide the traceability that regulators demand, in a clear and transparent manner.

“So contrary to popular opinion, we have no plans to sell direct to farms. But we do need to start by putting the right foundations in place.”

As a result, the company has extended its network of agents from five to ten.