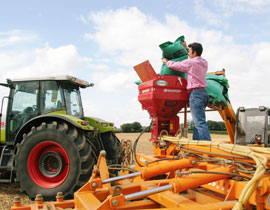 Oilseed rape and, eventually, wheat varieties will be bred and marketed by Bayer CropScience as the agrochemical firm expands its seed division into Europe.

“We are a seed company as well as a chemical company; it is just you haven’t seen that in the UK and Europe, but you will.”

The focus in Europe would be on oilseed rape and wheat, he said. The firm had set up two winter oilseed rape breeding stations – a Bayer start-up in Belgium and an acquired facility in northern Germany – after the purchase of the Raps GbR business.

“It means we have significant breeding activities for hybrid oilseed rape, alongside a bioscience centre in Ghent, where we are trying to pull out some traits that might be valuable for this crop.”

The first of those could be a strong pod shatter control mechanism, with sclerotinia resistance another target.

The first varieties from the Bayer pipeline were already in UK trials, with Patron, a Raps-bred conventional line, a candidate variety for the HGCA Recommended List this season. Further varieties were in national list trials, Mr Cottey told Farmers Weekly. “Hopefully within a couple of years you will see bags of seed on farm with the Bayer logo on.”

But wheat was the primary crop target for the expanding seeds business to invest in, although the first commercial varieties were unlikely to be in UK fields before the end of the decade, he said. “A major step was the announcement of a European wheat breeding centre in Germany in December 2011, and there will be a further two breeding stations in the Ukraine and France.

“As with all the main breeders, our targets are the things we need to do to counter the global challenges of producing more, more reliably, using less, so definitely yield, and to produce plants with better mineral and water use efficiency.

“If we can produce some disease-resistant types as well that would be great, but we want to produce wheat plants that are fitted to the future and can produce more under the conditions we can expect.”

The firm would look to advanced breeding techniques, particularly marker-assisted breeding, but also genetic modification where appropriate, and classical breeding to help reach its targets, he said.

Marker-assisted breeding was a particularly important technique that sped breeding up by allowing breeders to analyse traits in progeny seed without even planting it in some cases, he said. “Selection can now be done before sowing the next generation, which hugely speeds up the process.”

Bayer would also be looking at a new branch of breeding, where interactions between varieties and agrochemicals were investigated, aiming to breed varieties to use with specific chemicals, or vice versa, he said.