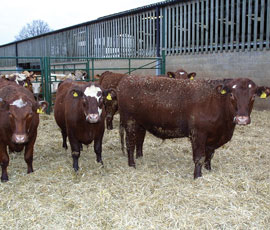 English beef producers’ net margins improved last year, but most continued to make a loss, according to a new benchmarking report from EBLEX.

It showed that lowland suckler producers lost an average of £236.72/cow, with even the top third of producers losing £58.28. The figures included family labour, rent and interest on working capital, but excluded income from the Single Payment, environmental stewardship or diversification.

Finishers up to 16 months were the only sector with a positive net margin, averaging £27.62/cow, with some animals sold as stores, said the report. Combined rearers and finishers lost an average of £314.50 a head.

Although there were clear improvements in all net margins compared to the previous year, the gap between the average and top third producers remained high, at up to £190 a cow, said senior EBLEX analyst Carol Davies.

“The top third spend significantly less on fixed costs; this continues to be a key focus area for producers seeking to improve their margins.”