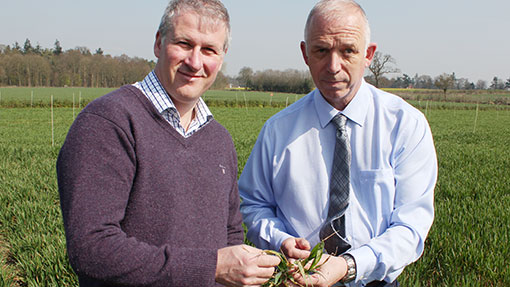 Winter wheat growers are being urged to cast their mind back to the season of 2012 and should shift more focus on early season disease management this year.

With arguably more septoria, yellow rust and brown rust inoculum lurking in crops than two years ago, the worst should be feared and money spent early could be money saved later.

“It is essential to get a robust protectant product on at T1 and at Prime our spend proportions have shifted further towards that timing over the last two seasons.

“We will certainly be continuing with that policy this year and 80% of our wheat will receive an SDHI product at T1,” he said.

Covering Norfolk and Suffolk, Mr Riley is advising his clients to spend around 34% of their fungicide budget on the T1 spray and between 35-36% on the T2, which is a much closer costing than previous years.

The 2012 season saw persistent rain arrive in the spring to spread the disease through the crop canopy and spray days were at a premium from mid-April to mid-May.


Where Mr Riley had seen growers apply their T1 in good time to protect crops prior to the weather turning that year, good yield results were achieved.

“If T1 creeps forward to ensure that you are getting that material on, mind the gap between T1 and T2.

“This will be particularly important in the West where septoria pressure is high and could mean factoring in a T1.5 to ensure that the crop is protected until the flag leaf emerges,” he explained.

In addition to the current high disease pressure driving the need for a robust T1, sliding efficacy of the triazoles for septoria eradication also reinforces the need for a protectant fungicide programme.

Historically, the triazole actives such as epoxiconazole and prothioconazole have given robust curative activity on septoria that has taken hold on wheat leaves.

“Although the new SDHIs have some curative activity, they are nowhere near where the triazoles used to be and are actually better protectant fungicides.

“With no new products in the pipeline, we will be using combinations of these products for the foreseeable future and ensuring crops are kept clean early in the season will reduce resistance selection pressure,” said Mr King.

Syngenta’s SDHI isopyrazam is combined with epoxiconazole in its products Seguris and Keystone – Keystone has 10% more triazole loading – have shown strong protectant performance in French trials.

Compared with the leading SDHI-triazole formulations Adexar and Aviator in the company’s French trials, Seguris provided septoria protection beyond 50 days as the others tailed off.

The relevance of this data has been questioned said Mr King, because intervals should be no more the three to four weeks anyway.

However, shading effects the deposition of the T2 fungicide mix through the lower canopy, with 30% less hitting leaf three than leaf two or flag leaf.

“Although leaf three only contributes 8% to final yield, disease moves up the plant, so keeping it protected will help minimise disease spread to the top two leaves ahead of T2.

“Using Seguris at T1, followed by Aviator at T2 has given the best results in our trials in both maintaining green leaf area and final yield,” said Mr King.

Reducing the need for curative activity at T2 lowers resistance selection pressure on the SDHI chemistry and using a multi-site active ingredient such as chlorothalonil and folpet provide added resistance management.

Mr Riley also reminds growers that the strobilurin fungicides still have a role to play despite their loss of activity on septoria due to resistance.

“Building chlorothalonil into the programme is key, but strobilurins are very useful in rusty situations and there is a lot of yellow and brown rust around at present,” said Mr Riley.