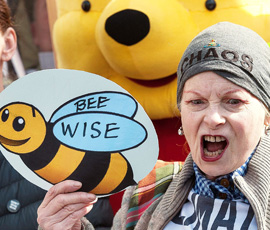 More than 100 beekeepers and conservationists have held a march in London to protest against pesticides linked to bee decline.

The March of the Beekeepers was organised to protest against farmers’ use of neonicotinoid pesticides, which have been blamed for killing bees and other essential crop pollinators.

Organisers said the march was organised to “grab the weekend headlines and pile pressure” on DEFRA secretary Owen Paterson ahead of a vital EU vote on Monday (29 April), which could determine the future of neonicotinoids.

The EU has proposed that member states stop using neonicotinoid-based products and seed treatments on crops attractive to bees for a two-year period while tests are carried out into their safety.

The three neonicotinoid products identified are produced by Syngenta and Bayer CropScience – clothianidin, imidacloprid and thiamethoxam.

In January, the European Food Safety Agency (EFSA), an independent body tasked by the European Commission to assess the safety of these products, concluded that they posed a “number of risks” to bee health.

The House of Commons Environment Audit Committee has also published a report concluding that certain neonicotinoid products are harmful to bees and backed calls for a ban.

Scientific studies have shown that dosing bees with neonicotinoids in laboratory conditions using high dosages effects their foraging behavior, learning and memory abilities. But critics say these studies do no accurately reflect what is going on in the field.

Field-scale studies, including research published by DEFRA last month, show that when used under normal field conditions these products are safe.

Unlike France, Italy and Spain, the UK is likely to abstain or vote against a ban on neonicotinoids in Monday’s crucial EU vote. According to reports, Germany, could back Britain’s stance and vote against a ban.

DEFRA secretary Owen Paterson said: “The European Commission has proposed the ban on certain neonicotinoid products based on the data from laboratory trials, which we believe delivered exaggerated doses to bees.

“At the last council meeting in March I asked all the member states to await the position of our field data on bees, which showed colonies grew.

“I am trying to get the commission to not take any precipitous action, but call on all member states to carry out field trials. We need to do proper studies to show the impacts of neonicotinoids in field conditions.

“If we lost these products it would seriously affect food production and we would fall back on older technology with a worse environmental impact.”

Luke Gibbs, spokesman for Syngenta UK, said: “The groups marching today have never presented any evidence from the field that these pesticides damage the health of bees.

“Somewhat irresponsibly, they are presenting a ban on them as the silver bullet for improving bee health.

“This is not supported by the recent UK government field monitoring study or the EU’s own data from beekeepers and scientific laboratories which shows that diseases, viruses, and loss of food for bees are the real causes of the decline in bee health.

“We call on these NGO’s to stop focusing on pesticides and work with us to address the real causes of the problem.”

Meanwhile, recent reports by the AFP news agency in the French media have suggested that the vote on Monday is likely to result in no clear majority again.

If this is the case, the European Commission could decide to put in place a ban despite the stalemate, reported the agency.