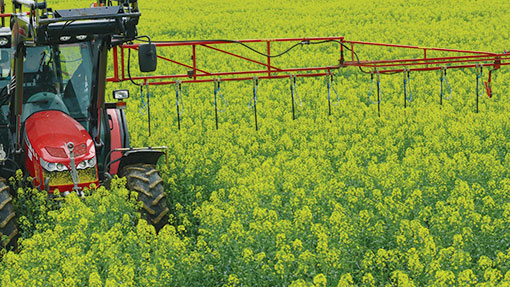 An exciting new spraying technique in oilseed rape could reduce the amount of pesticides that bees are exposed to and also see added benefits of better pest and disease control.

Trials carried out at the University of Hohenheim in Germany have shown that by using a dropleg device, which extends the spray nozzle below the canopy, growers are able to significantly reduce the amount of pesticides found in beehives.

The research work, started in 2013, has found sprayers are able to pass through the oilseed rape crop with minimal damage due the flexible frame of the dropleg.

Then rather than covering the flowers, that provide food for the bees, the spray is distributed lower down the plant, with a 98% reduction in spray drift.

The promising results have now encouraged German plant breeder DSV to undertake its own trials along with the University of Soest.

“The goal is to get as much data as possible and find out more about the efficacy in the field, with the most important topics sclerotinia and cabbage seed weevil,” says Alexander Döring, product manager at DSV.

Similar technology has already been used in vegetable crops in the UK. However, there are now hopes this can be adapted to oilseed rape.

Around 90% of the oilseed rape crop in Germany is sprayed with fungicides during flowering and at a time when bees are most active in the field.

This has led to high number of different pesticides being found in the stored pollen in beehives and some honey being rejected for human consumption. During the initial research an analysis of more than 100 beehives showed at least 10 actives were detected in each beehive.

Although these pesticides were detected at relatively low levels, looking after every active has become vital to growers who are seeing an ever-dwindling range of chemicals in their spray shed.

The widely used neonicotinoid seed treatment was banned in the European Union in December for use in oilseed rape following a number of studies showing a link between the pesticides and a decline in bee health.

Dr Döring says while the trials have shown bees are subject to little or no exposure to pesticides when using the dropleg device, efficacy against sclerotinia and other diseases and pests is key.

“This is an interesting technology that has so far impressed in trials. However, there are still plenty of open questions to see what other benefits we might be able to get and also if there are any limiting factors,” he says.

Sclerotinia can cause up to 60% yield loss in severe cases and control of this disease accounts for the majority of sprays during flowering, but the trials are looking deeper into whether it is necessary to have the fungicide applied over the flower.

“Because sclerotinia affects the stems, it may work better with this technique, but we are still looking at this,” says Dr Döring.

Cabbage seed weevils are one of the main pest threats in Germany, but Dr Döring says the shyness of these insects may benefit growers should they use this system.

“If they feel something is moving they drop down to the soil and into contact with the pesticide. This might depend on weather conditions though. It may work in sunny weather when they are very active, but not as well when it is cloudy and cold,” he says.

Pollen beetles, which are also common in the UK, are seen as less of an issue as it is generally recommended to apply pesticides before flowering.

The technology does require a reasonable investment from growers, with a dropleg currently costing about £60. However, the possibility of it proving successful and rolled out on a larger platform would see a reduction in price, according to Dr Döring.

Heino Schaupp, DSV area manager, says it is vital everyone works together to help develop a crop that is important to both growers and beekeepers.

“We are interested in having a sustainable growth, so this is why we are part of this project with other partners,” he says.

“There is still a long way to go until this technology will be established on farms, but with current pressures it may be needed sooner rather than later if it proves successful,” he adds.

The project partners in the first year of trials were University of Hohenheim, Syngenta, Bayer and machinery group Lechler.