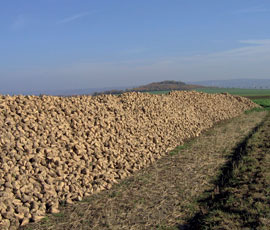 The third round of the Beet the Best competition looked at harvesting strategy and storage techniques. Adam Clarke reports.

Many growers are underestimating the potential crop losses at harvest and there is confusion on clamp design for cold and warm conditions, according to responses in the third round of the competition.

BBRO trials carried out over the last 10 years show that losses amount to an average 2.5t/ha.

“Beet can be left in the ground, over topped and also cut off at the bottom of the root, which all contributes to losses,” said Paul Bee, British Sugar’s agricultural communications manager. “We have seen growers that have lost up to 8t/ha, more than the value of harvesting costs.”

Growers should ensure that the beet harvester is set up correctly to minimise losses, whether it’s their own machinery or a contractor’s, said Mr Bee.

“It’s in the grower’s interests to ensure harvesting is managed correctly and that adjustments are made to suit field and crop conditions to reduce the damage to the crop,” he added.

Constructing a clamp during mild conditions for short-term storage usually occurs during the early part of the season, and some entrants confused the correct formation with one that would be more ideal in colder conditions, later in the season.

“It provides the maximum surface area, which stops heat building up within the clamp, whereas later in the season, a clamp 2.5m-high, 8m-wide, with bale walls and a pallet base would be more appropriate,” said Dr Wilcockson.

Agronomic questions had very few incorrect responses from contestants, although there was some confusion when identifying the symptoms of boron deficiency, which results in the blackening and shrivelling of heart leaves and eventually heart rot.

All but two contestants were able to identify violet root rot in the picture round, which is an increasing problem, said Mark Stevens, crop protection group leader at Brooms Barn Research Centre.

“This year we put out an extra bulletin, as the mild autumn seemed to favour the disease,” said Dr Stevens. “Currently there are no chemicals or genetics to control it, so growers need to be vigilant.

“It’s encouraging that it’s well recognised, with wider rotations the only way to reduce disease levels currently. Carrots and potatoes are also hosts, so that should be considered where they are grown,” he explained.

The loss of sugar beet quotas as part of the reform of the EU sugar regime could lead to a bright future, say some entrants.

The final round of the competition included an open question relating to the challenges facing the sugar industry in the UK if quotas were removed and possible solutions.

Removal of quotas was deemed to be a potentially positive move in the long term, with the current system restricting production and reducing competitiveness of the UK industry, said one entrant.

Price volatility leading to a lack of confidence to invest was a concern raised by another entrant, with the UK industry currently having limited capacity to expand.

“The increasing demand for sugar beet as an energy source is seen as an opportunity beyond quota, to increase production with a market in place.”

One entrant pointed out that, “although the removal of quota would be a positive move, it would be wise to have a transitional period to allow the industry to put the correct infrastructure and business models in place to cope with an increase in production”.

More than 80 teams have been battling it out in the Beet the Best competition in four categories, including grower groups, individual growers, agronomists and individual youth entrants.

Winners will win an all-expenses paid trip to look at sugar beet production in both northern and southern Spain, and will see spring and autumn sown sugar beet crops in their respective areas.

The winners will be announced later this month. For more information, visit our dedicated Beet the Best page