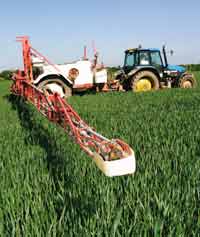 With crops racing through their growth stages, delays of more than a week could create problems, especially as the forecast is for increasingly unsettled weather, they warn.

Only the most forward winter wheat crops received their T2 treatments this week, with most flag leaf treatments being scheduled for the next seven days.

But flag leaves are coming through very quickly, notes Hutchinsons’ Dick Neale. “Crop growth is accelerating. We normally see the flag leaf out on 20 May – this year it’s going to be seven days earlier than that.”

For some growers, this will mean going back in with the sprayer sooner than they planned. “It could be just 14 days after the T1. Windy weather interfered with some of those applications, but plants have grown away rapidly since.”

The subsequent dry weather means that the flag leaf is unprotected as it comes out, he warns. “The chlorothalonil in the earlier sprays is still at the bottom of the plant. So growers should forget about calendar date and go with the growth stage. They need to get the protection on.”

“The majority of T1 sprays are still active,” says Nick Myers of ProCam on the Hertfordshire/Cambridgeshire border. “They didn’t go on until the end of April and we’ve had warm, windy weather ever since.”

Disease pressure isn’t very high, he adds. “That’s helpful if wind and rain delay things a bit next week. But it would be a concern if we got more than seven days behind, as the T2 spray is the crucial one.”

He has no plans to reduce the level of disease protection provided by the flag leaf spray. “There’s no point going below a three-quarter dose of triazole and there should be a strobilurin in the mix as well. Only growers in areas which remain dry can change things.”

Mr Neale believes product choice is more straightforward this year. “There’s a good selection of fungicides which will all work well in a season like this one. We’re not under extreme pressure, so it’s difficult to differentiate between them.”

However, rates will need to be adjusted, he advises. “And that will depend on the amount of rainfall you’ve received in the last couple of days, as well as your plans for T3.”

That need is due to septoria, rather than yellow rust, which has been kept at low levels by the lack of rain splash to date, says Mr Neale. “But the septoria situation will change very rapidly with the unsettled weather, especially where the T0 was omitted. So be ready with your sprayer.”

Yellow rust is present only in a few hotspots on Robigus and Oakley, he notes.

In Hampshire, Ben Freer of The Arable Group reports flag leaves still emerging. “They’re not right out yet.”

T1 sprays, which were applied later than normal, are still working well. “Of course, disease pressure has been low. But that won’t necessarily remain the case.”

He agrees that T2 plans shouldn’t be changed. “There’s no justification for reducing rates or delaying the spray timing. It’s the most important spray.”