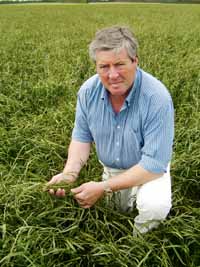 The most perfect autumn has left Mid Canterbury awash with feed, grass and brassicas. Growth has been phenomenal and if it’s a case of feast or famine, I’d have to tick the former. Of course, this brings with it issues that are not all good news.

Many arable farmers last year became somewhat disillusioned growing relatively low value feed barley, so decided to target the dairy grazing option. Cows are dried off before being grazed “off farm” for about 10 weeks commencing 1 June. Arable farmers grow kale and offer barley straw to maintain these in-calf cows through the winter period until they return home to calve in late August.

What we are now witnessing is some of the less reputable dairy farmers walking away from these contracts due to the abundance of feed, having found feed closer to home or at cheaper rates. This type of behaviour does little to unite two sectors of the farming industry that rely so heavily on each other, whether they like it or not.

We are fortunate in that we have signed a deal, although we had put wheels in motion many months ago and 500 Friesians arrive here on 1 June. No doubt it will pour down once they arrive and I’ll wish we hadn’t seen them, but with the rewards on offer it’s very hard to ignore.

Our arable contracting services appear to be gaining momentum and apart from completing our own autumn workload on time, we have the output to offer an efficient service to clients. A final field of Savannah wheat, sown at 100kg/ha, went in to an ideal seed-bed following summer turnips for a neighbour.

Jobs on farm, apart from the daily ritual of moving break fences for store lambs include irrigator maintenance. Winter servicing is crucial if we are to avoid downtime with these machines during the forthcoming irrigation season.

Read more from Bill and our other Arable Farmer Focus writers.