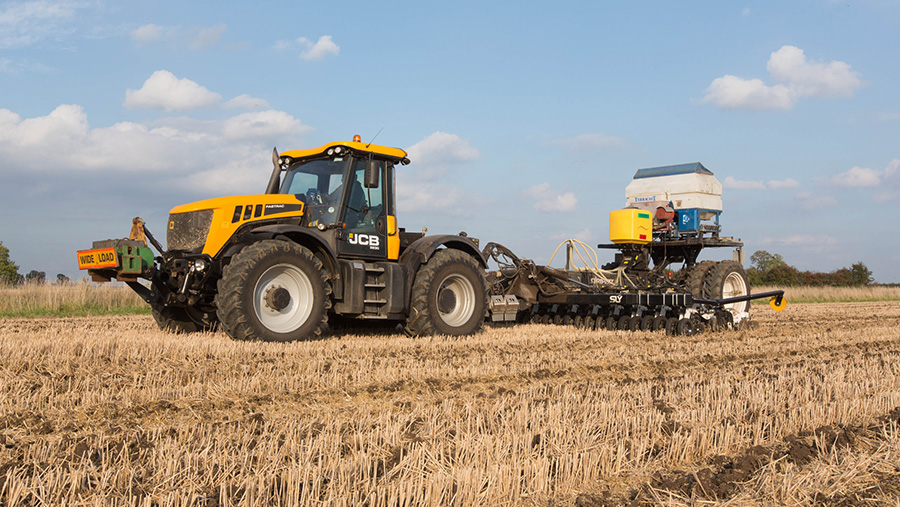 This cultural approach is not just valuable to organic potato growers who cannot use chemistry, but also to conventional systems which rely on nematicides.

Nematicides are under considerable scrutiny from EU legislators and the green lobby while this season, one key product – Vydate – is unavailable due to a factory accident in Texas, USA last year, leaving very few chemical options.

“FLN is becoming a more important pest in the UK,” says Helen Wilson, head of forage crops at RAGT Seeds.

“Crop damage thought to be caused by poor fertility, compaction and/or poor drainage can often be an FLN problem.

“Growers are becoming more aware of it and it appears to be more widely spread than many people think,” she says.

The trials, being carried out by RAGT and Agrovista, involve a 1ha site at Elgin on the Moray Firth which is under organic production on a farm that has suffered high free living nematode counts, says Agrovista agronomist Andy Steven.

“The farm operates a fairly intensive cropping regime – cereals, potatoes, the occasional carrots crop and grass, but nothing out of the ordinary.

“Spraing, the disease caused by the tobacco rattle virus transmitted by FLN, is a fairly common problem here and on other lighter soils in Morayshire. Around half the samples show high FLN counts.”

The site was split into five sections – one untreated and four areas each planted with a different biofumigant crop – oilseed radish, white mustard, Hardy Mix (a blend of oilseed radish, Ethiopian mustard and rocket) and Japanese oats.

These were drilled in late July to ensure there was plenty of biomass to be chopped and incorporated in mid-November.

“This would be normally expected as soils become wetter in the autumn, encouraging nematodes to move upwards through the soil profile.”

Numbers of these two species were higher than the treated strips to begin with and reached proportions where a nematicide would need to be given serious consideration, he adds. Longidorous was present, but the population was much smaller.

All four biofumigants reduced numbers across all three FLN species, apart from the Japanese oats which struggled to contain longidorous (see graph, above).

“We can’t say statistically that everything worked better – the Hardy Mix and the Japanese oats worked reasonably well.

“But in this trial at least, the oilseed radish did the best job and white mustard came a good second,” he says.

Oilseed radish provided the best control of longidorous and trichodorous, while white mustard had the edge on pratylenchus.

That suggests targeting specific biofumigant crops at different species of nematode might help further, and is likely to be a key focus of future trials, says Mr Steven.

If these results were repeated in the field, Mr Steven predicts significantly less feeding damage as well as potential disease reduction.

“Growers in this area have achieved 4t/acre yield increase where feeding damage has been reduced. Potatoes will be planted across the trial site so we will be able to measure this effect.”

The trials also show it is possible to establish biofumigant crops in the far north of the UK, albeit in a relatively mild climate, says Mr Steven.

“A big challenge in this area is getting a cover crop established on time to provide enough green material for it to work.”

In practice it might be best to plant biofumigant crops after winter barley or Environmental Focus Area fallow, he adds.

“Overall we seem to have achieved what we hoped in terms of establishing the crops and reducing numbers, and it certainly merits further investigation.”

Ms Wilson adds: “Although we can’t assess these unreplicated strip trials statistically, we can say we’ve seen a decrease in population size with all four treatments, giving a definite indication of a trend that warrants further investigation.”

While biofumigants may not replace nematicides as long as they are available, the results show they could keep potato growers in business if such chemistry does disappear, she says.

“We know biofumigants work well on [potato cyst nematode], though not as effectively as nematicides, and I suspect the same is true of FLN,” says Ms Wilson.

“But they will still deliver a good level of control which, in the right rotation, could help to keep numbers down.”