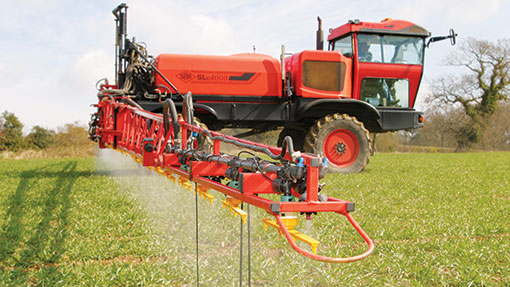 Once the weather dries up, many growers’ minds will turn to blackgrass control in autumn-sown cereals. Luke Casswell looks at the latest advice.

Late-drilled autumn cereals are facing an onslaught from blackgrass with experts warning swift action is needed for those that missed pre-emergence sprays.

Applying a residual herbicide as soon as possible will be crucial, according to John Cussans, weed biology specialist at crop consultant NIAB TAG and he urges growers not to wait for temperatures to rise.

“Growers need to take any opportunity to get a residual on, if they haven’t done so already. Then you need to be looking at applying your contact product once there is active growth,” he explains.

These late-sown crops are coming under increasing pressure as they battle blackgrass which is racing through its growth stages much quicker than last year, and Dr Cussans suggests plants are two weeks ahead of last year.

Similar time constraints were seen before Christmas when growers rushed to complete drilling in December in sub-optimal conditions and with little time to employ grassweed control measures.

These crops are in a critical state, according to Dr Cussans who says growers should not rule out the possibility of cutting their losses and abandoning the crop.

“Too many people have opted to stay with their crop over some really bad years. If you have got a crop that hasn’t got a pre-emergence on and is full of blackgrass you are not going to recover that situation,” he says.

Dr Cussans says 30 blackgrass plants/sq m will cause growers problems as they will have an average of 10 tillers per plant and 100 seeds a head, spelling trouble for years to come.

There are a good proportion of growers who drilled early and have managed to apply their whole grassweed programme. These crops are looking healthy and control has generally been good, says Dr Cussans.

“Too many people have opted to stay with their crop over some really bad years. If you have got a crop that hasn’t got a pre-emergence on and is full of blackgrass you are not going to recover that situation.”
John Cussans, NIAB TAG

For early-drilled crops that haven’t received post-emergence herbicides, growers are advised to wait until temperatures begin to rise and blackgrass growth starts before applying their key ALS-based herbicides such as Atlantis and Unite.

In regions where blackgrass is the primary threat such as Cambridgeshire and Norfolk, Dow AgroScience’s cereal herbicide specialist Stuart Jackson recommends his group’s pyroxsulam-based Unite product together with a further residual.

“It’s an absolute priority to get a residual on, and the best thing would be to get a flufenacet-based product on,” he says.

“You can only get 120g on so our advice is to add some pendimethalin or some prosulfocarb, which will ideally be something you haven’t used before,” he adds.

The wet weather is amplifying the issue for growers with Mr Jackson saying the worst case scenario is that they are unable to get their residual on due to saturated soils.

“In this case you will definitely have to go with a tank mix along with your ALS herbicide,” says Mr Jackson.

The weather is also going to drive active growth, which is key for growers when looking at their timings.

Unite can be applied up to GS24 and you want to be applying it with two-to-three days active growth on either side.

“Brome is a much bigger problem in Scotland and in the West. If you are targeting brome, as soon as you can travel go with a pendimethalin- or flufenacet-based product and then you can come back with Broadway Star,” he advises.

It is preferable to apply herbicides to weeds that are small and actively growing, although Broadway Star is recommended up to growth stage 24 for brome and tame oats, while growers can go up to GS29 for ryegrass and wild oats.

These products can be mixed with T0 or even pre-T0 fungicide sprays as many growers will also be looking to control the high levels of disease in crops.

Stephen Moss, blackgrass expert at Rothamsted Research tells Farmers Weekly the key is what residual product is used with main blackgrass products Atlantis and Unite to prevent resistance building up.

“Growers will probably be looking at using something in addition to Atlantis or Unite, and I think half rate Liberator is a good option,” he says.

Determining the best residual is always difficult according to Dr Moss who says Defy has worked well in the past and adding pendimethalin will also add something else in the fight against blackgrass.

In high infestations, Dr Moss says if growers are able to use Auxiliary then it may also give growers another option, giving further contact activity.

Despite some of the issues experienced in the late-drilled crops, Dr Moss says there are some that have competed well against small infestations of blackgrass.

Bayer CropScience’s Phillippa Overson says the big challenge this spring will be getting onto the land with southern England and parts of the Midlands experiencing twice the average rainfall for January.

“We haven’t had a cold snap to stop everything growing and shut it down that we would normally have,” she says.

“If they haven’t got their pre-emergence spray on then I would advise mixing in a residual with their Atlantis and we recommend using 0.3l/ha of Liberator, which can be used up until March 31,” she says. Atlantis and Liberator are Bayer products.

Growers who drilled early and were ahead in the autumn should also still be carefully assessing the weather and making the most of any spray windows in order to top up their spray programme.

Ms Overson stresses the key will be to hit the blackgrass when it is as small as possible in order to give growers the most efficacy from their post-emergence programme.

“The best thing to do is pay attention to your application technique. You need a dry leaf, a good forward speed and an opportunity for it to dry after,” she says.

“We advise not to put anything in with your Atlantis other than the adjuvant biopower and your residual partner. Anything else you reduce efficacy and increase chance of crop damage,” Ms Overson adds.