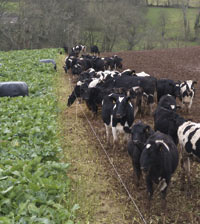 Drying cows off in the correct body condition is important for optimum production and fertility in the next lactation – but even more so for those considering outwintering dry cows. That’s because cows on crops such as fodder beet, stubble turnips or kale will maintain condition until calving, not gain it.

This, therefore, means only good conditioned cows should go out – those scoring at least 2.75, says LIC consultant Mike Bailey. “Favourable conditions will allow some weight gain in some cows, but it is not guaranteed. So the emphasis is on getting cows right before the wintering period,” he says.

With eight years’ experience of outwintering under his belt, Andrew Brewer will be outwintering 750 spring calvers on fodder beet this year in Cornwall.

“It’s more efficient to put condition on during late lactation than the dry period. Because we want to dry off at score three we aim to feed as early as September so we have no thin cows being dried off at the end of November,” he says.

“On the whole, we expect outwintered cows to hold condition. Although as the weather improves, late calvers can gain weight rapidly. Outwintered cows are fitter and have much fewer calving difficulties as they have excellent muscle tone.”

Any cow scoring less than 2.5 at drying off has access to outdoor crops plus housing and ad lib silage. However, Mr Brewer says cows will only be found indoors when it’s wet and windy And cross breeding and the New Zealand type of cow he uses has also resulted in a minimal number of thin to manage.

Once cows are out, body condition should be monitored regularly. Mr Bailey suggests second pair of eyes to score cows, ideally someone who isn’t seeing them daily, but has seen them before they go on the crop.

“It’s a good idea to pick out some easily identifiable ‘indicator’ cows as reference for what is going on and keep scoring these. You should be assessing all the time, pulling poor doers off when necessary. Some cows will just not cope on crops. This usually becomes apparent early on, particularly after the initial adjustment period of seven to 10 days.”

Mr Bailey reminds producers fat cows risk calving difficulties, stillbirths and metabolic problems such as milk fever. Thin cows can end up with metritis and, although they don’t tend to lose as much condition after calving, they are still thinner at the planned start of mating (PSM).

“New Zealand research shows cows calving at condition score 2.4 compared with score three are 7% less likely to be cycling at PSM. Those cows that haven’t started cycling have a 16% lower six-week in calf rate and a 6% higher empty rate.”

For Mr Brewer, the key to a successful outwintering is to be prepared to act when conditions change. When cows are losing weight, this means housing or giving them access to a shed so they burn up less energy keeping warm. “You’ve got to be flexible in this system,” he stresses.

Stuart Marshall, who manages 500 spring calvers for Geoffrey Sayers in Devon, runs what he calls a fair weather outwintering regime.

“We don’t outwinter cows for the sake of it. Although the farm is free draining, we have little shelter and are quite exposed. We have to be flexible with the weather and have the option to bring cows in. Our thin (score 2.5) or lame cows always stay in cubicles and are fed silage.”

Cows are dried off from the end of November ready for calving on 20 January. Normally dry cows are then outwintered on 60-70 acres of kale with big bale silage unwrapped as needed.

“The cows like it and tell us when they are hungry and are much fitter at calving. Because they dry off in better condition at score three, we have no problems in maintaining it on good quality silage and kale. We’re not keen on feeding dry cows to put condition on.”