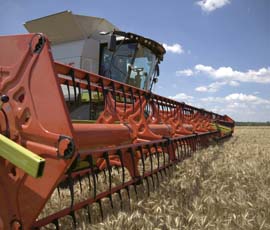 Richard Beachell is back on combining today (13 August) at Field House Farm, Bainton, Humberside, after showers swept through the area yesterday.

“It’s going alright – we’ve got crops that are ripe at the moment, so we’re just nipping away as and when they’re ready.”

So far Mr Beachell had cut 32ha of Cheerio spring barley, which was yielding 8.6t/ha at 16% moisture, according to the combine scales.

Early drilled Excalibur oilseed rape had yielded about 4t/ha, while Venture winter barley had been cut and sold at 9t/ha.

Although his own winter wheat was still some way off, The Arable Group started combining its trials on the farm yesterday. “It was coming off at 18% moisture, so it’s hard and fit.”