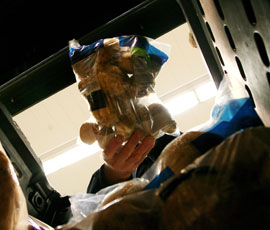 In the year to 25 December 2011, retail potato sales grew overall but some varieties suffered compared to last year.

The volume of fresh potatoes sold by retailers fell slightly by 2.1% to 1.65m tonnes, but the value of these sales increased by 1% to £1.05bn.

However, red varieties took a hit during the last quarter of 2011 with volume and value sales shrinking by 26.5% and 22.7% respectively.

Maris Pipers appear to have lost out to economy potatoes with a 12.1% reduction in value and 11.8% in volume, whilst King Edward sales fell by 3.1% volume and 8.1% value after a previously strong quarter.

“From a shopper perspective they were looking for value-for-money in 2011 and we expect them to continue to do so in 2012,” said Caroline Evans, head of marketing and corporate affairs at the Potato Council.

“This is not the same as wanting ‘cheap’ food, but rather wanting to understand the benefits of a product and why it offers good value. This is a real opportunity for potatoes as they are versatile and meet this need already; we just need to ensure this message is reaching shoppers.”