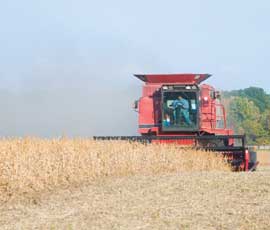 Five million soya farmers in Brazil are locked in a legal battle with Monsanto after refusing to pay royalties associated with the biotech company’s genetically-modified seeds.

Farmers who use Monsanto-patented seeds must pay a royalty to use the seed up front.

But a bitter dispute is gathering momentum over whether Monsanto should be allowed to collect a 2% royalty for “renewal” seed harvests – crops planted using seed from the previous year’s harvest.

Lawyers acting on behalf of producers say they end up paying twice for the seed.

Jane Berwanger, a lawyer representing the farmers, told the Associated Press: “Monsanto gets paid when it sell the seeds. The law gives producers the right to multiply the seeds they buy and nowhere in the world is there a requirement to pay (again).

“Producers are in effect paying a private tax on production.”

In 2004, a Brazilian court ruled in favour of the farmers, saying Monsanto owed them at least $2bn (£1.3bn) from royalty collections made since 2004.

However, Monsanto has appealed the decision and a Brazilian federal court is expected to rule on the case by 2014.

Last year, Brazil was the world’s second biggest producer and exporter of soya beans, behind the USA.

Illegally smuggled into Brazil 14 years ago, transgenic soya now represents 85% of all soya bean crops in the country.

Soya bean feed, largely imported from Brazil, is currently the major source of protein in pig feed in the UK, at about 70%, and accounting for 30% of feed volume.