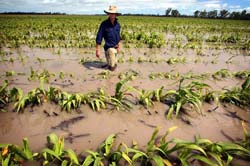 High-yielding arable crops that can withstand periods of flooding could be a step closer after researchers discovered how plants sense low oxygen levels.

Across the world, crop production is at risk as catastrophic flooding becomes a worldwide problem. Last week, thousands of families lost their homes and crops as floodwaters swept across Central America and in Thailand, huge tracts of farmland were submerged as the country faced its worst flooding in 50 years.

Prolonged flooding drastically reduces yields by cutting off the supply of oxygen that crops need to survive. But experts at the University of Nottingham, working in collaboration with the University of California, Riverside, have identified the molecular mechanism plants use to sense low oxygen levels.

Michael Holdsworth, professor of Crop Science at Nottingham, explains that the mechanism controls key regulatory proteins called “transcription factors” that can turn other genes on and off.

“It is the unusual structure of these proteins that destines them for destruction under normal oxygen levels, but when oxygen levels decline, they become stable. Their stability results in changes in gene expression and metabolism that enhance survival in the low oxygen conditions brought on by flooding. When the plants return to normal oxygen levels, the proteins are again degraded, providing a feedback control mechanism.”

The team expects that over the next decade scientists will be able to manipulate the protein turnover mechanism in a wide range of crops prone to damage by flooding, making them more flood tolerant.

The project is funded by the Biotechnology and Biological Sciences Research Council (BBSRC), Malaysian government through MARA, the US Department of Agriculture National Institute of Food and Agriculture (USDA-NIFA), and the US National Science Foundation.