Britain’s bee farmers could have a key role in helping growers increase arable and fruit crop yields, by providing a targeted pollination service.

There are about 400 professional bee farmers in the UK, earning a living from producing honey. 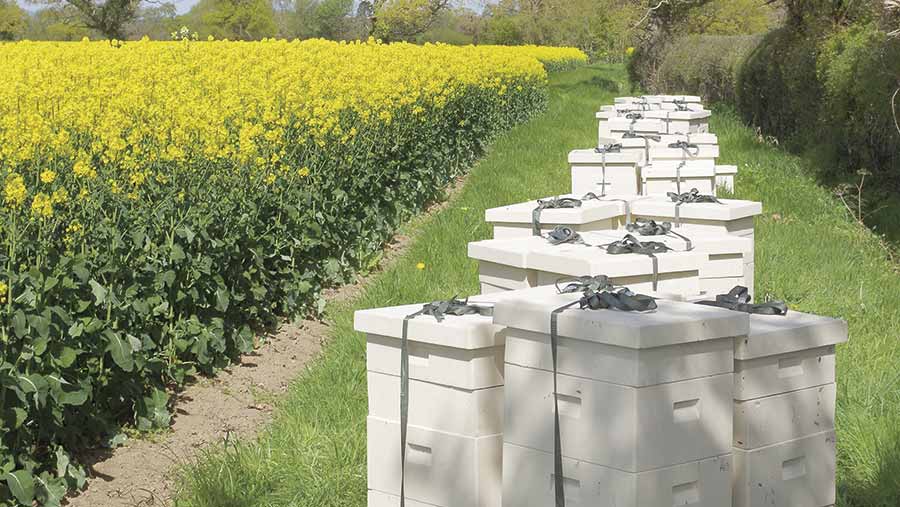 However, one valuable sideline is the industry’s own pollination service, where arable farmers and fruit growers rent hives from bee farmers.

The service is managed by Norfolk farmer Alan Hart, who has over 200 hives. He believes honeybees can help fill the pollination deficit in this country.

Pollination is an essential part of food production, vital for one-third of food consumed. However, natural populations are sometimes not up to the job.

Mr Hart says that wild pollinators, such as bumblebees and solitary bees, are present only as small colonies or even just individual adults in early spring.

“You do see bumble bees and solitary bees, but they are in small numbers. By the time they rear their young, it is too late to pollinate fruit,” says Mr Hart.

In contrast, honeybee colonies coming out of the winter will contain 25,000-30,000 bees that are ready to go.

So by renting hives, pollinators can be placed where they are needed, says Rob Nickless, vice-chairman of the Bee Farmers Association.

“These pollinators act as an insurance, as you know there will be plenty of pollinators in your crop,” says Mr Hart. 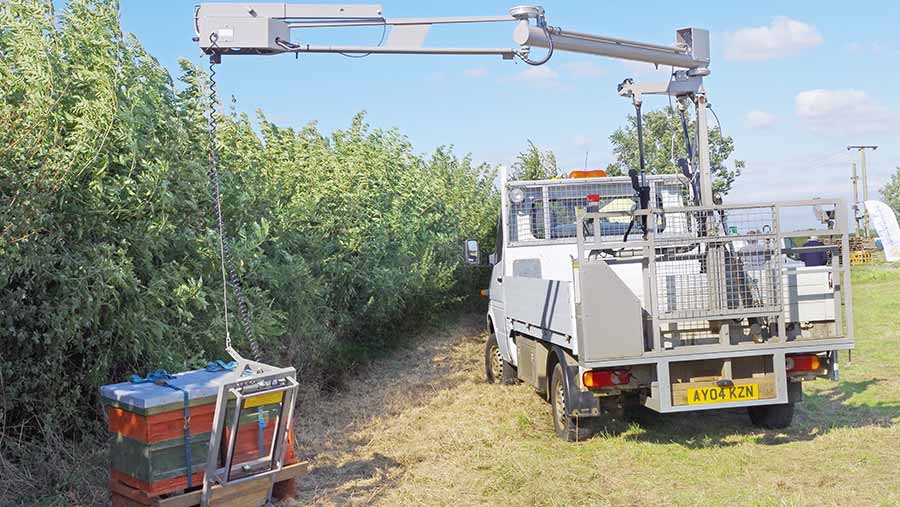 The National Pollination Service matches growers with professional bee farmers who are members of the association. Bee farmers sign a contract that includes a commitment to provide robust colonies, with bees covering five frames of brood.

There is a cost for the pollination service, to compensate for the lower honey production as well as the logistics of moving hives at just 24 hours’ notice.

Typically, hives are rented for a month and customers may have a specific time for their removal, such as at blossom set.

One farmer using the service is Brian Lock, who farms 450ha on two farms in Dorset. For several years he has hired hives from a local bee farmer for his oilseed rape, before moving onto spring beans.

This year he is planning to use bees to help pollinate 50ha of oilseed and 30ha of spring beans on his farm near Sherborne.

“It’s difficult to quantify the benefits as you can’t do trials with no bees. But I like to give the crop every opportunity, as well as doing good for the bees.”

Mr Hart adds that some other farmers have reported yield increases of 20% in oilseed rape and beans.

So far, the service has mainly targeted premium arable crops like oilseed rape and beans grown for seed, as these farmer recognise the benefits.

These seed growers are producing better-quality seed. “Germination increases from 83% to 96% in oilseed rape and beans,” says Mr Nickless.

Another key sector using the service is fruit, which relies on insect pollination.

Even crops under poly tunnels and glass are being successfully pollinated, as bee farmers have found a way of getting bees to fly under plastic.

Extensive experience has found that it is not a case of simply placing a few hives near a crop. The distribution and placement of hives, timing of introduction and the condition of the colonies all make a difference to their effectiveness.

“For oilseed rape, you are looking at 2.2 hives/ha to get the lift in yields,” says Terry Cooke, who has 300 hives in Dorset.

He adds that hives need to be spread, as bees won’t fly over plants to reach those further away, says Mr Cooke.

With fruit, getting the right amount of pollination is vital for fruit size, thereby meeting strict supermarket specifications.

“If crops are under-pollinated, you end up with fewer, but larger fruit, and likewise with over pollination, you see lots of smaller fruit. Therefore, you need the right density of bees,” says Mr Nickless.

Honeybees are also good for wildlife and bird food, as they are the only pollinator in significant numbers to pollinate blackthorn and hawthorn hedges early in the season, he says.

Looking to the future, the association is looking to expand its service, and is now targeting arable farmers. Interested farmers for next season can contact the Bee Farmers Association.

What is bee farming and how does if differ from beekeeping?

Terry Cooke, who has 300 hives in Wiltshire, sees it as “effectively harvesting sunshine”.

“Bee farmers are farmers,” he says. Unlike hobby keepers, who tend to have five to 10 hives, they make a living from a combination of producing honey, wax products and pollination services.

Mr Cooke direct sells a proportion of his honey under his own Wiltshire brand and sells the remainder to packers.

Like livestock, bees require regular monitoring and all hives are inspected every 10 days.

Most hives are kept on host farms and are located to ensure there is plenty of food.

It is not just about nectar, pollen is a protein source and bees collect it and use it to feed their brood. Therefore, the more pollen there is, the stronger the hive is and better pollination.

Like cattle and sheep, bees face pest and disease pressures – the most widely known is the varroa mite.

“Varroa is endemic and we are having to manage it to a safe level of less than 1,000 mites/hive, by using treatments.”

However, Rob Nickless sees two other key challenges: weather and viruses. Poor weather, like in 2012, can result in very low levels of production, although there is little that farmers can do about this.

The main concern is chronic bee paralysis virus, which is spreading and seems to particularly affect worker bees.

Anything that threatens the future of oilseed rape growing is also a threat to bee farming.

There is a perception that growing oilseed rape has an adverse effect on bee health, because of the debate over neonicotinoid seed treatments. However, that is not the case.

In fact, as Terry Cooke points out, without oilseed rape, many bee farmers would go out of business, as the crop accounts for half of their income.

“Like arable farmers, bee farmers want to see healthy oilseed rape crops, as they are a rich source of food.

“We have a good relationship with our host farmers. If they need to spray a crop, a quick phone call and we can shut the hives for the spraying operation.”

Alan Hart adds that in his 40-odd years of bee keeping, he hasn’t lost a single hive to pesticides.