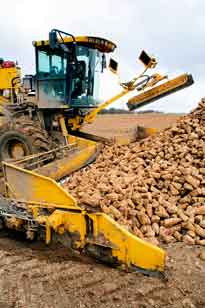 Radical changes to the transport of sugar beet have been proposed by British Sugar and the NFU in a bid to cut costs and improve efficiency.

A voluntary pilot scheme set out in the NFU/British Sugar transport efficiency study will be implemented at the company’s Newark and Wissington factories later this year.

The study proposed that British Sugar should co-ordinate all beet haulage, with growers having ex-farm contracts and hauliers competing for haulage territories directly with the company.

A harvesting option will also be available, linked to haulage, to improve the co-ordination of harvesting and haulage.

For the 2010 season, British Sugar will be writing to all growers in the Newark and Wissington areas with details of the pilot scheme, assessing the level of interest.

Similarly, hauliers will also receive letters in April with the scheme details. Once declarations of interest have been returned, they will be selected according to location, experience, efficiency and services offered.

Growers involved in the pilot scheme will not receive the transport allowance, explained Mark Culloden of British Sugar’s Wissington factory. “As now, there will be an additional haulage charge applied to those sites which are more than 50 miles away.”

For the pilot scheme to operate, a maximum of 15-20% of the factory site’s total tonnage will be required.

Other recommendations made by the study include the publication of best practice guidelines and extended factory servicing hours.

Chris Douglas of transport consultants TTR pointed out that “Currently, 700 of the 2000 vehicles involved, transported less than two loads per week,” he said. “In addition, some 10% of loads are carried by vehicles with payloads of 26t or less, while 550 vehicles are more than nine years old. This has obvious implications for fuel efficiency.”