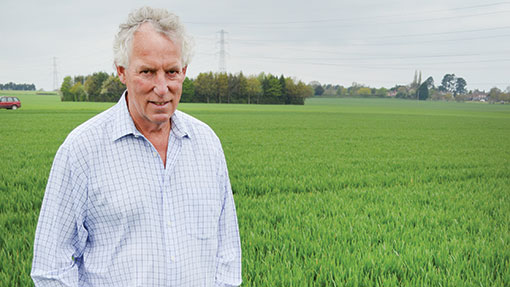 Plentiful supplies of water from irrigation is behind one wheat grower’s attempt at a top yield this season, as he hopes to keep the world wheat record in the family. David Jones reports.

Richard Solari is hoping to beat his brother’s world record wheat yield this harvest on his light land in Shropshire with a helping hand from irrigation.

His sandy loam soils have produced wheat yields close to his older brother’s bumper harvest in New Zealand, and eliminating water stress could give him an edge.

Brother Mike emigrated to the southern tip of South Island 40 years ago and, in 2010, set a world record with a winter wheat yield of 15.6t/ha, setting a challenge for Richard back home.

Mike comes back most summers to his native Shropshire, and Richard jokes each year that this could be the season he equals or captures his brother’s world record.

“I can’t see why we can’t have the same or higher yield here,” says Richard.

His highest yield came from an irrigated crop of Oakley winter wheat in 2011, which managed 14.1t/ha, way ahead of his average farm yield of about 9t/ha.

This season he is making an attempt to grow a record-breaking wheat crop as part of the Yield Enhancement Network (YEN) competition run by crop scientists group ADAS.

If an extra 1.5t/ha yield is not possible to pip his brother, then the UK wheat yield record set last year in the Lincolnshire Wolds at 14.31t/ha is closer at hand.

Watering wheat on Richard’s light, easily worked soil is key, and in the good harvest year of 2011, irrigation pushed his yield up by 3t/ha and by as much as 5t/ha in 2013 as the extra water applied in the sumer stopped his crops dying in the July heatwave.

This year, he is planning a five-way split, totalling 340kg/ha, of nitrogen, a four-spray fungicide  programme and as much as 300mm of irrigation to feed a potential wheat yield he puts at 15t/ha.

With plenty of nutrients and water, and disease kept under control, the only limiting factors will be sunlight and temperature in Britain’s fickle summer weather.

This is his fourth year of using irrigation on winter wheat and he aims to cover 80ha this season, and of that 36ha will be given as much water as the crop needs.

The focus of his 480ha of arable cropping at Heath House Farm, Beckbury, near Shifnal, 10 miles west of Wolverhampton, is potatoes, but in his five-year rotation of potatoes, wheat, peas, wheat and barley, the irrigation equipment is increasingly used for wheat.

Patches of his irrigated wheat have yielded up to 23t/ha according to the yield monitor in his combine, but the variability of his fields brings down the overall average.

“The wheat crop has the potential as long as we feed the plants with everything they need in terms of nutrients and water,” he says.

His brother Mike has plenty of advantages with New Zealand’s very high radiation levels from the sun, his deep river silt soils and steady summer rainfall.

Richard will be doing his best on his poorer lighter land and with less sunlight, but water stress for his chosen wheat field should not be a factor.

His potato crops have priority for water, but with his current reservoir capacity, he is prepared to irrigate his chosen wheat area for a 10-week period through May, June and the first half of July.

He has installed water probes in his wheat fields, in addition to his potato land, which will measure the available water in the soil and warn him of any water stress.

He is using Enviroscan probes, which are powered by solar energy and feed back water deficit readings to his computer in the farm office.

As yield is related to the water use by a crop, Richard saw a considerable increase in water uptake from irrigation in the good harvest year of 2011.

“Water is the key to feeding the world. The world is not short of food, it is short of water,” he says.

He calculates that 60-80% of the cost of irrigation is energy, and so he is starting to use solar power to pump water, and this year all the water for the wheat will be moved using energy from the sun.

“We know if we irrigate then we will get a yield response. What we need to know is how economic is this response,” he says.

One key timing for irrigation is at early flowering in wheat when any moisture stress can result in grains not filling completely.

For the YEN competition, Richard has chosen a 24ha field and the variety Oakley, again due to its reliability on the farm, although with its susceptibility to yellow rust, he is trying out Kielder, Relay and Dickens this season on the farm.

The Oakley YEN crop was drilled in late September and is in the midst of a getting 340kg/ha of nitrogen in a “little and often” five-way split to minimise leaching on his light soils.

“In trials, we have seen the maximum yield response in wheat up to 340kg/ha,” says Ian Matts, company agronomist at fertiliser group Yara UK.

Agronomist Neil Buchanan, at distributor Agrovista, is also mid way through advising on a four-spray fungicide programme with no sign of yellow rust yet, but septoria is being seen in most crops.

Richard says his brother Mike has phoned to say he has just finished cutting his 50ha of winter wheat in New Zealand, with an average yield of 13t/ha, giving him all the more incentive he needs for a big crop at home.