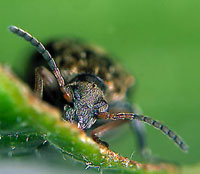 An online forecasting system that gives bean growers a five-day advance warning of impending Bruchid beetle attack is being trialled this spring.

Syngenta‘s BruchidCAST is being evaluated by growers as part of the DEFRA Sustainable Arable LINK project to develop more effective controls for the pest.

PGRO research has confirmed results from France that the key danger period for Bruchid beetle attack is when there have been two consecutive days with temperatures above 20C. These trigger female beetles into sexual activity and egg laying in the developing crop.

Preventing damage in the crop relies on reducing egg laying by the female beetles, PGRO’s Anthony Biddle points out. “The timing of the spray is, therefore, critical.”

Trials have shown that spraying when the first pods have developed and after the temperature has reached 20C on two consecutive days reduces damage. A second spray should be made 7-10 days later.

Damage to bean seed from Bruchid beetle larval feeding is a primary reason for UK crops failing to meet lucrative export standards, Syngenta’s Mark Bullen points out. “We now have a better understanding of the pest and the application timing to achieve control. BruchidCAST could give a vital early warning of beetle activity to optimise spray timing.”

It uses a simple traffic-light system to warn when treatment might be required, giving up to five days warning of suitable conditions. It also includes a localised five-day forecast to help growers schedule applications.

Syngenta is running a similar system for potato growers targeting blight control. It gives advanced warning of local blight risk based on when Smith Periods might occur, allied to a forecast of spray opportunities that enables growers to better schedule and select blight sprays, says Mr Bullen.

If growers know there is a period of sustained high blight risk coming, then it is imperative they use the more robust fungicides to counter the threat, he adds. “The spray window forecast will ensure they can make the applications at the most timely opportunity to give maximum protection.”