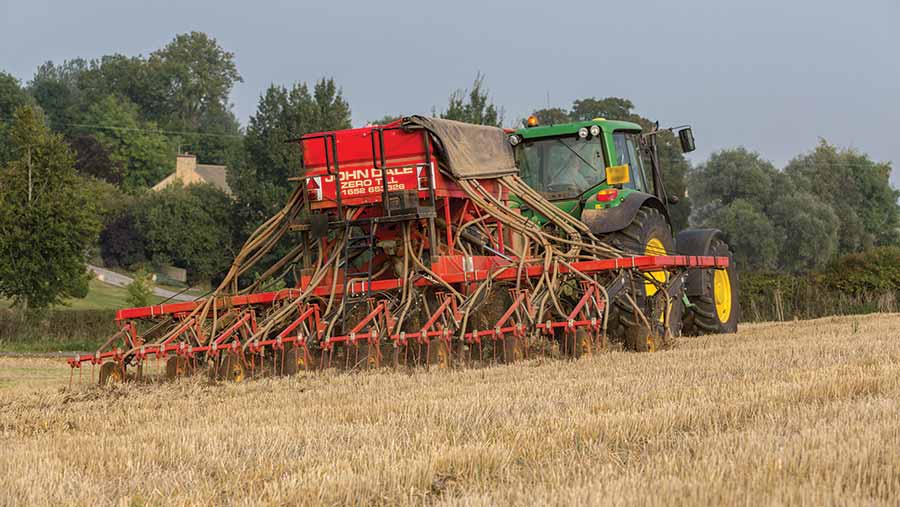 Whether at grower meetings, hashtagged on your Twitter feed or even featured on BBC’s Countryfile on a Sunday evening, “no-till” enthusiasts are certainly making a lot of noise.

Global grain commodity prices have fallen to a miserly level and look set to stay there for the foreseeable future, squeezing margins.

And as the United Nation’s international year of soils comes to an end, the industry has also been given a stark reminder of the consequences of neglecting its most valuable resource.

These two factors drive the economic and environmental case for no-till crop establishment, but is it really the answer in UK conditions?

True no-till drills aim to plant seed directly into the soil in one pass with minimum soil disturbance (see table, below). Those who remember the previous drive for no-till in the 1970s will also be aware of the challenges.

Independent mechanisation expert Bill Basford explains the main reason no-till soon went out of fashion was the inability of early drills to adequately close the slot behind the seed.

“That’s particularly the case on heavy land, which lends itself to the systems. You had slugs marching down the slot or water running down it on sloping ground, which led to erratic or poor germination.”

Mr Basford adds that lower-horsepower tractors also limited drill width to just 8-10ft, so work rates were not significantly improved – now recognised as one of the key aims of no-till.

Once mutterings of a future straw-burning ban began in the early 1980s, no-till was pushed down the agenda, according to Dick Godwin, soil tillage and management expert at Harper Adams University.

No-till largely disappeared between 1981 and 2005, according to statistics presented in a Niab Tag report for the HGCA (now AHDB Cereals and Oilseeds) in 2012, except for the few hardcore enthusiasts.

The last estimate reckoned slightly less than 5% of the UK wheat area was established using no-till in 2010. “However, from anecdotal evidence that will have increased quite significantly in recent seasons,” explains Prof Godwin.

So what has changed? Soil type certainly hasn’t, but Philip Wright, independent machinery and cultivations expert, believes the available technology certainly has improved.

GPS and wider drills allow for better control of traffic or even fully controlled traffic farming (CTF) systems in lanes, while more flexible low-ground-pressure tyres and tracks reduce the effect of compaction – a serious concern for no-tillers.

The herbicide armoury – despite obvious resistance issues – is much improved and cheap and effective glyphosate has given growers the confidence to let things “green up” knowing that they can kill it all.

“The technology on the drills has also improved to be more precise and subtle. We know more about what is sensible soil disturbance and there is better residue management.

“People are embracing the job with a much more open mind and are able to adapt when problems do occur,” says Mr Wright.

Prof Godwin recently wrote a report for the Worshipful Company of Farmers called Potential of No-Till Systems for Arable Farming.

As part of the research, five farmers who have already embraced no-till all said improving their farm’s economic performance was the number-one reason for the switch.

One quoted a £5,000/year reduction in machinery costs over 750ha, while diesel bills typically fell 30-50% and work rates increased, leading to an overall drop in cost of production.

“Time with the family was also raised and there isn’t such a demand on the growers’ business time. You can have a second life as well,” explains Prof Godwin.

Although there are obvious savings once up and running, the terrifying cost of some new no-till drills may put smaller arable units off, with an expensive bit of kit laying redundant in the shed for much of the season.

In these cases, Mr Wright believes contractors and machinery sharing with neighbours can have a significant role to play to ease people into the system.

“It could get you where you want to be without the big investment.”

While growers are slashing costs, it is suggested yields could suffer and this has been highlighted by a recent study by the University of California Davis (UCD).

Said to be the largest investigation of its kind into no-till research data, it concluded that on average, the system led to slight yield reductions globally.

There were exceptions to this trend, with yield matching or improving on conventional systems in arid climates where maintaining surface residues helped retain scarce moisture.

This is consistent with 1970s research that mapped the suitability of UK soils for direct drilling (see right) and divides England, Wales and Scotland roughly into wet and dry areas.

The remaining 20% has a substantial risk of lower overall yields, particularly in spring cereals, but Prof Godwin points out that the research was carried out with machines not as capable as they are today.

“I think what you have to do in those wetter areas is pay more attention to managing the system and the equipment used to establish crops,” he says.

He adds that this is where the “sensible addition” of cover crops could be helpful, naturally using moisture to help dry soils out, in addition to other well-known benefits of nutrient capture and boosting fertility and organic matter.

Mr Basford questions the need to expect so much of no-till systems in terms of yield, if it enables growers to produce their crops more economically and help to improve soil health.

“We are fixated on trying to make these systems yield the same, if not more than conventional systems,” he says.

“There is an argument that if you are putting less in, you can tolerate a little less yield compared with conventional systems – perhaps we could accept lower yield from lower inputs?”