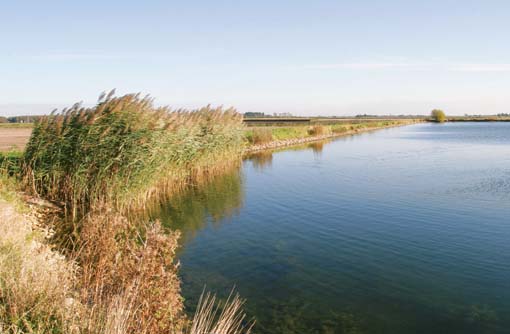 A summer abstraction licence is fine when there is plenty of water, but hotter and drier summers and increasing water demands mean long-term access isn’t guaranteed.

Some catchments are already restricting abstraction to times of high water flow and many growers have to speak with the Environment Agency daily to gain permission to irrigate.

But an increasing number of growers are trading in their summer licences in favour of winter abstraction and building a reservoir to store the water until it is needed.

Melvyn Kay, secretary for the UK Irrigation Association, says winter storage is the only way to guarantee water will be available when crops really need it. “It means you can take advantage when water supply is plentiful and reliable, and store it for use in the summer.”

Charges for abstraction during the winter months are also a tenth of the cost of summer abstraction.

But a reservoir is an expensive and sometimes risky investment and growers need to weigh up the pros and cons before committing, says Mr Kay. “However, growers should remember that this is a long-term investment and, if the trend towards hotter and drier summers continues, it could look even more attractive.”

Irrigation consultant Andrew Hawes says interest in winter storage reservoirs is building and he is working on four projects which should be completed in the next 12 months. “We are getting a lot of enquiries from smaller outfits and a few big businesses are also looking to increase capacity.”

When considering building a reservoir, finding a suitable area of clay is crucial because it negates the need for an artificial liner, says Mr Hawes “A clay-lined reservoir is at least half the price of one which is plastic lined and should last a lifetime. I’ve seen liners that went in 10 years ago and they are looking poor. They have a limited life-span and because they are hard to get out of you need to take safety precautions.” 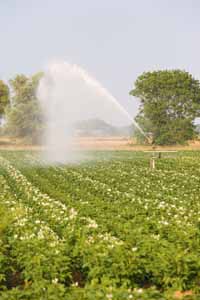 In one case where clay was found, but not in the ideal location for the reservoir, it was still viable to haul the clay to the better location, he says.

Once location is confirmed, the farmer needs to make sure there is a legitimate case for building the reservoir under permitted development rights. “This avoids the need to go through the headaches of full planning, which can also incur expensive fees.”

There used to be a £1,000 ceiling on agricultural planning applications, but they are now subject to the same charging structure as major developments such as supermarkets.

This stage can be reached without significant outlay, but the fees will start to build in the following stages, which involve drawing up plans and putting the work out to tender, says Mr Hawes. “When choosing your tender, make sure they have built a reservoir before and aim to construct from spring to August.”

Securing additional funding makes the project easier to finance, but a reservoir can be a viable investment without, particularly if it is a collaborative project. Some grant aid is available for irrigation projects and this is easier to obtain if it is a joint venture, he says.

Getting hold of the abstraction licence is probably the most time-consuming element and can take a couple of years. But Mr Hawes reckons construction can be completed in a matter of months and it is possible for a project to go from the initial idea to completion within a year.

The average size of a winter storage reservoir is 136m litres and the largest farm-scale reservoir Mr Hawes has worked on is 454m litres. “That one would have enough water to irrigate 450ha with 100mm of water.”

But 45.4m litres is also a popular size as it can be constructed without falling under the conditions of the 1975 Reservoirs Act, he says. “Projects larger than this come under the act, which introduces strict engineering standards.”

The reservoir will also be subject to annual inspections, more paperwork and expense. “A few people have tried to get around this by putting in nests of smaller reservoirs, but it is still more economical to build one large one.”

But installing underground piping to distribute water across the farm can double the project cost, he says.

1. Is a winter storage reservoir a viable investment for your farm?

2. Have you got legal permission from the Environment Agency to abstract the required water volume?

3. Is there sufficient clay on the farm? A clay-lined reservoir is roughly half the price of one which needs to be lined with plastic.

4. Is there a suitable site with access to sufficient power to move the water around the farm?

5. Have you got a legitimate case for construction under permitted development rights?

Allow a minimum of two years from concept to commissioning – a more realistic estimate is three years. It is usually planning issues and environmental assessments that take up the time.

Year 2 – apply for an abstraction licence and local authority planning permission. Then proceed with design, tendering, and start construction. Summer is the best time for construction. Most people miss the boat because all the good contractors are usually booked up for the summer months. If this happens, then move into Year 3.

Year 3 – start construction in early summer. Commission reservoir in the autumn ready for filling in the winter.

Mr Paul exchanged the farm’s 160m litre summer licence for one winter abstraction licence with a 190m litre limit. “The licence runs from 1 November to 31 March, but we still need to keep in touch with the Environment Agency to check flows.”

But because the licence is lower than the 250m litre reservoir capacity some water is always carried over to the following year.

A pre-planning application was submitted to the local authority in spring 2005, but there were delays due to the sensitive nature of the site and a £70,000 archaeological survey was requested, he says. “It was very difficult to get agreements sorted and planning ended up being delayed a year.”

At the time of building no grant funding was available, but Mr Paul says the £1m investment was still viable. “Payback is about 15 years, but the life of the reservoir and irrigation network is considerably longer.”

Because Mr Paul was able to build a clay-lined reservoir no maintenance is required, unlike with a plastic liner, which would have a limited lifespan.

But despite the capacity, Mr Paul didn’t have sufficient water to irrigate his cereals this season. “Cereals are looking desperate and if we didn’t have vegetables we could have preserved yield potential in most of the wheat and sugar beet.”

One wheat field did receive some water, but the cost of applying water means it doesn’t really stack up, he says. “You can justify it on potatoes and sugar beet, but for cereals it is questionable.”

For more advice on building a winter storage reservoir visit www.ukia.org and look for the irrigation booklet Thinking about an irrigation reservoir?