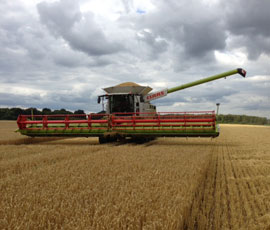 Josh Stratton is extremely excited about harvest at East Farm, Codford St Mary, Wiltshire, with some bumper yields hopefully on the cards.

“I’m a very happy farmer – the yields are really good and everything is going well,” he said.

So far he had cut 110ha of Charmay spring barley, which had yielded between 7.5t/ha and 8.5t/ha, and made the malting grade with a nitrogen content of 1.6%.

He had just started on Propino spring barley today (8 August), making harvest only around four days later than normal.

“At the end of March everything looked diabolical, but over the past month I’ve been really quite excited about harvest, and so far I’ve been proved right,” he said.

Mr Stratton had another 57ha of Charmay to cut at a different farm this weekend, and expected to be into the first wheat in four or five days’ time.

“We normally have a lot of winter barley, but I couldn’t get it drilled, which is why we’ve got so much spring barley this year,” he said. “I’d be very tempted to grow it again.”

The farm’s chalky soil had coped well in challenging conditions, soaking up the water over the winter and releasing it during the dry spring, said Mr Stratton.

“The wheat looks fantastic. We had a dry two weeks during pollination, followed by sun. I’m growing Oakley and think there’s the potential to have some massive crops.”

Adding to the excitement of a good harvest was the farm’s new massive Claas Lexion 780 combine with a 13.5m header.

“She’s a honey – my combine driver is deeply in love,” said Mr Stratton. “She’s doing 60t/hr in spring barley while chopping the straw without any loss of power – it’s absolutely phenomenal.”