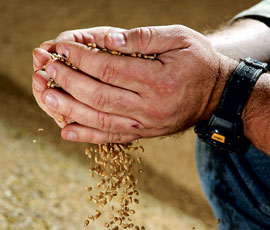 Campaigners have launched a new offensive against field trials of GM wheat at Rothamstead Research in Hertfordshire due to take place in 2012 and 2013.

GM Freeze’s campaign, called ‘GM wheat – No Thanks!’, calls on farmers and businesses to pledge not to use of buy GM wheat and demands that research money is directed at “more sustainable food production methods.”

“We want the trial stopped immediately and all public funding currently aimed at GM redirected to research into genuinely sustainable agriculture, including agroecology and non-GM high-tech plant breeding.

“One of the biggest mysteries of this GM wheat is who is expected to buy it. There is no market anywhere in the world for GM wheat, so why are we putting our countryside at risk?”

DEFRA gave the go ahead for the trial on the aphid resistant wheat variety in September 2011.

The research was given the green light only after gaining approval from the independent expert group – the Advisory Committee of Releases to the Environment (ACRE).

ACRE said it was satisfied that the proposed trial would not result in any adverse effect on human health or the environment, although the committee imposed a number of precautionary conditions to the statutory consent for the trial.

These aim to ensure that no GM material from the trial will enter the food and feed chain.

The conditions are as follows:

• Wheat pollen barrier planted to flower at the same time as the GM wheat.
• Ensure 20m surrounding the trial site is planted with a non-cereal crop
• Control cereal volunteers before planting
• Control of couch grass using glyphosate within trial and surrounding 20m
• Ensure all wheat and barley material in the area of release is inactivated at end of trial
• Ensure the GM wheat harvest field is left fallow for one year after harvest
• Treat volunteers in the fallow year with glyphosate

A DEFRA spokesman said: “Protecting consumers and the environment is our top priority and we’re permitting a tightly-controlled, small-scale scientific trial in which none of the wheat will enter the food chain.”