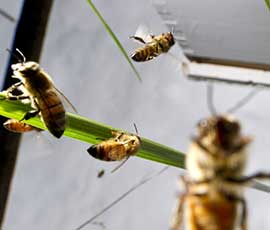 Canadian researchers are experimenting with novel ways to get honeybees to deliver pesticides to crops to kill pests, reports CBC News.

Using a new method, called “bee vectoring”, the bees drop off pest control agents as they fly from one flower to another.

As they exit their hives, the bees walk through a tray of organic pesticides that stick to their legs and hair. The natural pesticides include viruses, bacteria and fungi which are known to target specific pests, but they are not harmful to bees or humans.

As the bees pollinate crops, the pesticides rub off on flowers to fight the pests plaguing crops. The fungal spores attach to pests and penetrate their bodies to kill them.

In early 2013, the Canadian government approved bee vectoring of Beauveria bassiana, a fungus that grows naturally in soils but also acts as a parasite to various crop pests.

This method has been shown to successfully distribute strains of Beauveria bassiana to greenhouse-grown tomatoes and peppers as well as oilseed rape in the field to kill pests like whiteflies and aphids.

“They [bees] are out there working seven days a week. You’re getting continuous introduction of control agents. If you sprayed, you’re only spraying at one point in time, but the bees are there constantly delivering this.”
Les Shipp, Agriculture and Agri-Food Canada

Les Shipp, a senior government research scientist with Agriculture and Agri-Food Canada, who is leading the study, told CBC News: “We’ve been able to use these to control pest and fungal diseases. We’re able to reduce some diseases by 80%.”

He added: “They [bees] are out there working seven days a week. You’re getting continuous introduction of control agents. If you sprayed, you’re only spraying at one point in time, but the bees are there constantly delivering this.

“I wouldn’t look at it as a silver bullet. It’s another tool to control pests and diseases. We hope it drastically reduces sprays.”

“There’s work being done now on outdoor crops, and the potential there is huge,” he said.

Research into bee vectoring started at the University of Guelph, Ontario, in the 1990s. However, interest in this method is increasing in Canada with agri-tech companies investing in the technology.

OPINION: A busy time for birds and bees