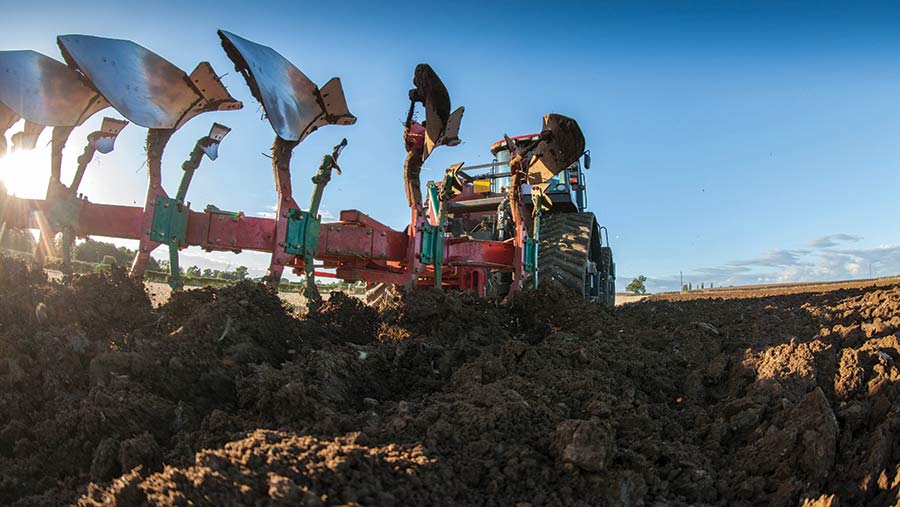 Soil degradation is a huge cost for farming, which was estimated at up to £1.4bn a year in a recent parliamentary report Securing UK Soil Health. Of this, flooding resulting from increased compaction is estimated to cost £233m a year.

The two main problems are compaction and the loss of organic matter, which is vital for soil structure and gives it much of its fertility. Both of these account for 80% of the £1.4bn cost.

“Over the past 20 years, one key element that has led to declining soil health is the growing mechanisation of farming and bigger tractors.

“It has been a gradual process, with machinery becoming more sophisticated and larger – with bigger, wider tyres to take the extra weight. This has taken its toll, having a direct physical effect on soil.”

In addition, tractor drivers sealed in modern cabs are removed from action on the ground and are, therefore, less aware of the impact of machinery on the soil, he says.

Compaction reduces the water-holding capacity of soil by decreasing the air spaces between particles and consequently, you get more run-off and standing water.

“Run-off is not good. It can lead to soil erosion and contaminate water courses,” says Prof Ward.

In addition, a healthy soil will hold on to nutrients better, reducing losses to the environment and promoting good crop growth. “Poor soil health is a restriction on crop yields and can lead to more disease, especially those in waterlogged conditions.”

The first place to start is by digging a soil pit, says Prof Ward. Examine the structure for any signs of damage that may need some repair work, such as deep cultivations to break up a plough pan.

Getting a spade out is especially valuable for determining if there is a hidden problem deeper in the soil profile.

“A rule of thumb is that compaction occurs at half the tyre width below the soil surface. So with more massive machines and bigger, wider tyres, this can be well below the plough layer.

This damage occurs even with low ground-pressure systems, but it can’t be seen because it is happening deep in the profile.

Prof Ward says this could catch out some farmers who are rotationally ploughing and believing this is breaking compaction.

Dr Chamen believes this hidden compaction could be the reason for the plateauing of wheat yields in recent years. He points to one trial looking at the impact of compaction under controlled conditions, where even after eight years, there was still a 1-2% yield penalty in wheat.

For this deep damage, Prof Ward says farmers need to consider using a ripper (subsoiler) to break up the pan, but again it has to be given a chance to recover and be managed over time.

How you manage fields after subsoiling is just as critical,” says Dr Chamen, as soil is more vulnerable.

“You don’t want to go in with machinery and end up back at square one.”

That’s why Dr Chamen believes prevention is key, as well as managing soils so they become more resilient. “It requires a range of measures, such as ensuring soils have a good level of organic matter.”

Adding compost, manure and chopping straw will raise organic matter levels, as will cover crops. Minimising the period there is no crop growing by maintaining cover is good for soil structure.

Also check drainage. “If there is poor drainage, even with the best will in the world, none of the preventative measures will be successful,” says Dr Chamen.

But the key thing farmer need to do is to avoid compaction in the first place by minimising trafficking.

“Trafficking damages the soil. It squashes out the air, squeezing it together, sealing up the surface and making it cloddy (see illustration),” he explains.

Switching cultivation system can help. He points to data showing that in a typical no-till system, about 45% of the field is trafficked. With a min-till system, this rises to 60-65% and with a traditional plough system, it’s 85% of the area.

However, to get below 40% of the area being trafficked, farmers will need to adopt controlled traffic farming (CTF).

This is a system that confines compaction to the least possible area by the use of permanent traffic lanes. A satellite guidance system is a valuable component in making it work, says Dr Chamen.

There are three different tiers, depending on how much the machinery matches up in width, resulting in the area tracked:

Many farmers will point to the high investment cost of replacing machinery, but he says it can be done at low cost when put in place incrementally, as machinery is naturally replaced.

He encourages farmers to try tier 1 with their existing machinery, as some will match up and then they can see the benefits for themselves. “Seeing the benefits to soil will then encourage them to move to tier 2.”

For some crops, a full system is not possible. For example, sugar beet harvesting is not on a compatible width, but if you use CTF in the rest of the rotation, you will see improvement and after five to six years, soils will be more resistant to damage come the next sugar beet harvest.

From his experience, reducing compaction with CTF will lead to about 15% more yield (average across 15 different crops) in non-trafficked areas and when it covers 80% of the field (tier 3), this is a substantial gain.

As soils recover their natural structure, there is a 15% better nitrogen recovery, with up to four times better rainfall infiltration and a 10% increase in top soil porosity.

It’s not just soil health, Dr Chamen points to cost savings as soil becomes healthier – needing fewer passes – and can go shallower, with a 35% decrease in fuel use for crop establishment.

One farmer seeing the benefits of controlled farming is Jeremy Durrant, who manages 1,300ha of cropping including wheat, oilseed rape, beans plus winter and spring barley.

“Six years ago, we were running an all plough-based system on Hanslope clay and we were expanding the area we farmed. But it was becoming clear that it was taking more time and effort to produce a good seed-bed and doing this over a larger area was not viable.”

“So we moved to a min-till system, however, we were getting cloddy seed-beds.

He explains that producing good seed-beds required more intensive cultivations and he was having to do quite a lot of subsoiling.

“This was not only time-consuming, but also expensive. We looked at reducing costs and decided to go with controlled traffic farming.”

Now fully on CTF with 12m wheelings and 36m tramlines, he estimates that the move has cut fuel use by 30-40% and requires less labour. The business has also gone from six tractors to two, supplemented with hired-in tractors at harvest.

Soil structure has improved year on year. “When we take on new land, it takes two full seasons before we see any noticeable difference and it continues to get better over time.

The improved soil structure resulting from less trafficking means Mr Durrant has gone from two/three passes with a cultivator typically covering 30-40ha in a day when establishing wheat, to a single pass with a lighter, wider cultivator covering 120ha a day.

“This gives you more flexibility on timing and it gives us confidence to delay drilling for grassweed control and still get good establishment.”

The improved soil health has allowed Mr Durant to cut cultivations further, direct drilling oilseed rape and spring crops. “This year all our oilseed rape (200ha) was drilled in a single 24-hour period.”