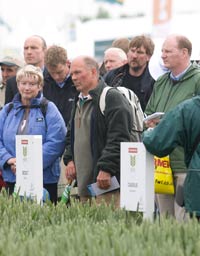 Over 26,500 visitors attended the biggest Cereals event ever at Vine Farm, Wendy, Cambridgeshire on 10 and 11 June.

That was 10% higher than last year’s attendance, which, together with more than 400 exhibitors, made it the biggest Cereals ever.

Haymarket’s Jon Day said: “The showery bursts didn’t seem to dampen anyone’s enthusiasm for Cereals, which was once again a runaway success.

“The tremendous display of technical and business content put on by more than 400 exhibitors has proved to be invaluable in attracting a growing number of visitors year on year.

“We are particularly delighted to have seen the successful addition of potatoes and renewables to the event, and to have outlined the importance of funding research in the arable sector to a number of minsters and MPs.”

Cereals 2010 will be held on 9 and 10 June at Robert Law’s Chishill Grange Farm near Royston, Hertfordshire.