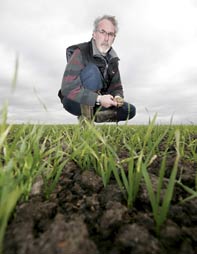 Velcourt and Hutchinsons are joining forces to host a careers centre at Cereals 2009 in a bid to attract farm management and agronomy recruits. The companies will mainly be looking for graduate and HND/HNC trainees but others will be considered.

Hutchinsons has eight trainee agronomists among its 250-plus staff and will be recruiting a further five to start this autumn. Full training takes up to three years and starts with a competitive salary and benefits, says Paul Hobson, marketing and training manager.

“As the number of courses directly relevant to agronomy has contracted, so the pool of suitably qualified people has shrunk. The most difficult aspect for us is to find people who combine the capacity and ability for the academic and technical side with being able to sell and forge long lasting relationships with customers. They also need to be very well organised,” says Mr Hobson.

The careers centre will be a separate marquee at the Velcourt stand manned by staff of both companies including current management trainees.

Recruiting trainee farm managers has been difficult for some years, although better results from the 2007 harvest provided some encouragement and enthusiasm, says Ken Shipley, Velcourt farms director for northern England.

“There has been a shortage of high calibre motivated people coming into farm management and agronomy. There just aren’t the numbers. Perhaps they perceive that there aren’t the jobs, but we are almost always looking for someone to fill a management position somewhere.”

About 80% of the 70 people currently in the Velcourt farm management team joined the company through its in house management training scheme and Mr Shipley will be recruiting this autumn. The salary is competitive and includes housing, he says.

Velcourt sponsors two Harper Adams farm management students though their college course, offering placements with the firm and a traineeship at the end of their studies.

The companies hope that this venture will also bring them into contact with candidates at an earlier stage in their career or education. They are also interested in older people who may be looking for a career change, for example following a farm business restructure. Sprayer operators who want to develop their careers have also joined Hutchinsons as trainee agronomists.