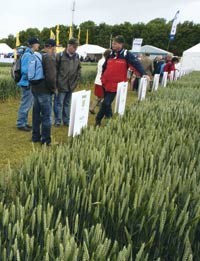 Will a new race of yellow rust change minds about key varieties or will fungicides enable effective management?

A new race of yellow rust infecting wheat crops this season could have serious repercussions for many top varieties, industry sources suggested at Cereals 2009.

The current top yielding variety on the HGCA Recommended List, Oakley was one that was “waving a white flag” to the new race, acc-ording to AICC member Patrick Stephenson.

Other popular wheat varieties also affected by the new race – which can infect across two of the diversification groups – include Solstice, Ketchum, QPlus, Robigus, Viscount and Humber, three of which joined the Recommended List only this year.

“It’s a great shame about Viscount,” said Mr Stephenson. “One of its many attractions to growers was its disease-resistance package.”

The yellow rust ratings of several varieties will probably change considerably after this year, confirmed Rosemary Bayles of NIAB.

“This new race was discovered on Solstice last year, so it is likely to have implications for some, but not all, varieties with Solstice in their parentage.”

But it also infected Robigus types, she added. “It has combined the virulences previously found in separate races to overcome the resistance of certain varieties and exposes the full susceptibility of others. It was the step we have been waiting for.”

This bridge between two of the diversification groups meant that growers could no longer exploit the differences between the Yr6 group (Einstein, Oakley, Mascot types) and the Robigus group, she explained. They are also facing a reduction in the number of resistant varieties availbale in the low-risk DG1 group.

“In the highest risk areas, growers will need to rethink variety choice. There, the only safe varieties will be those that still have eight or nine ratings for yellow rust when the new Recommended List is out.”

Those safe varieties included choices such as Scout, Panorama and JB Diego, she said. “We’ve still got more testing to do, including all the candidate varieties.”

Oakley was badly affected because it was already susceptible to existing pathotypes, she continued. “And now it seems as though it is more susceptible to the new race.”

Fortunately, there was no indication of any problems with fungicides, stressed Dr Bayles. “They are still effective and the timing and dose rate of any treatments will be crucial to achieving good control.”

That view was echoed by KWS consultant Bob Simons. “We still have the chemistry to control rust very well. The key is to keep ahead of it all season – difficulties only arise when you are chasing it.”

Growers should consider the use of seed treatments and fungicides with strong activity on rusts, he advised. “We still have the strobilurins for rust control. The other factor which is relevant to this season is the use of a T0 fungicide.”

Dave Robinson of The Arable Group agreed that yellow rust could be managed without adding much to costs, but he was concerned about disease levels in the field.

“It arrived at the same time in a number of varieties. As well as the ones infected with the new race, we are finding yellow rust in Gallant, Einstein, Alchemy, Cassius and Conqueror, most of which were known to have some susceptibility.”

As many of the varieties which had succumbed to the new race of yellow rust were widely grown, the disease would spread rapidly, he warned.