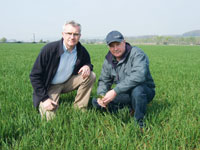 Given his annual use of about 600t of manufactured fertiliser, Martin Smart sees little reason to change his purchasing policy. For the complex 1600ha (3950-acre) farming business he oversees, buying and taking delivery in the relatively slack month of July makes a lot of sense.

“We’ve always been early buyers, mainly because of the logistics of making sure that our fertiliser is where we need it when we need it,” he says.

As arable manager for Ashton Farms, Trowbridge, Mr Smart starts his crop input plans for the next season as early as May, helped partially by four agronomists and guided on main nutrients by GrowHow’s Ross Leadbeater who is a regular contact on the farm.

Soil types on the land, in 14 contract share-farmed units spread over a radius of about 30 miles, vary greatly. “We have heavy clay, chalk with flints, light chalk without flints and limestone brash,” says Mr Smart.

Crops include winter wheat and oilseed rape, beans, maize both for forage and grain, peas and sunflowers.

“We had our highest ever wheat yield – 4.75t/acre of Oakley off chalk. We also did 4t/acre of Solstice and Gladiator.

To simplify operations on the fields that range greatly in size Mr Smart employs block cropping. “We have one field that’s 100 acres, but also some of only four and five acres.”

A GPS system, fully adopted for three years, has made calculating fertiliser needs more accurate, he notes. “It’s got rid of what I call ‘TARDIS fields’. So we now know exactly how big they are, and that’s been quite a reality check.”

Much of the land is light and would benefit from incorporating straw, but only that from the oilseed rape and beans is returned to the soil. In the mainly livestock area, with three of the farms producing beef cattle for Tesco, cereal straw is more valuable baled, explains Mr Smart. “We run four large square balers.”

However, the manure from those animals and other livestock helps cut the overall outlay on fertiliser on parts of the business. “We do get some onto the chalk, but the cost of haulage limits what we can do.

“We used to use sewage sludge, but not now as we were getting too many complaints about the smell.”

Given the straw removal, Heartland Sulphur (24:8:8 plus 8 SO3), is the farms’ key fertiliser input. By shifting phosphorus and potash applications from the autumn to the spring it helps reduce workloads, explains Mr Leadbeater.

Double Top (27N plus 30 SO3) and straight Nitram (34.5N) are also used, mainly on the heavier land, and kieserite is sometimes justified to ensure oilseed rape gets sufficient magnesium.

Urea has not figured as an N source for many years. “It’s not really suitable on these generally high pH soils,” says Mr Leadbeater.

Trace element needs, notably for manganese on some black puffy land, are normally satisfied via foliar sprays recommended by the agronomists.

This spring’s N-Min tests, on 10 representative soil type blocks, suggested that crop available residues were, in marked contrast to last year, very low. “So we’ll be upping the overall N this year,” says Mr Smart. On milling wheat that means the total could run to 250kg/ha, with feed varieties and oilseed rape justifying up to 200kg/ha, depending on the level of manure already applied.

Crop planning well ahead of sowing helps ensure that bought nutrients are used most efficiently, he adds. “The problem is that our cropping programme isn’t set in stone. For example we might be asked to contract-grow more maize for grain or forage.”

The potential downside of buying early, having money tied up for longer than if ordering later, is something he is prepared to accept in exchange for the logistical positives. “It’s not as if I’m buying just one load for one holding.”

“We have the spreaders tray-tested every year by Derek Howe of Spreader and Sprayer Testing.”

If you have a question for the fertiliser manufacturers, whether it concerns buying strategy, nutrient assessment, application technique or the latest GPS technology, there’s plenty of advice available. Exhibitors at Cereals 2010 include GrowHow (stand 311), Law Fertilisers (stand 537), Omex (stand 526) and Yara (stand 611).