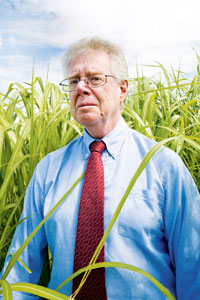 Climate change and the predicted doubling in demand for food production in the next 20 years will be the key drivers of future research, according to speakers at the Science in the Arable Sector debate.

He believes 5-10% of yield has already been lost this year in East Anglia due to dry conditions, with some crops already having a water deficit of 30mm.

This has already prompted research into developing varieties that give good yields in normal years and in years like this one.

Perthshire grower Adrian Ivory believes a greater effort should be made in speeding up the development of varieties for the “new climate”.

“We are trying to maximise yields with varieties bred for what is now a historic climate.”

Ian Crute, head of science at the Agriculture and Horticulture Development Board laid bare the urgency. “It takes a long time for research to come to fruition. For example, a new variety takes a minimum of 10-12 years to reach commercialisation.”

Thirty years from now, there is going to be a much different climate and there is just “one generation of scientist’s time” left. Work needs to start now.

“We need research into producing better long distance weather forecasting so that growers can plan properly for nitrogen and agrochem applications. Currently, it is hopeless and as a result, we are not using inputs as efficiently as we should.”

The second key driver of future research is the need to increase food production, while meeting environmental obligations under the Climate Change Act.

Prof Crute believes the greenest, most sustainable and profitable approach is to produce as much as possible, as efficiently as possible, on a smaller footprint of land. He calls it “sustainable intensification”.

This is because some land will need to come out of food production to be used to capture carbon dioxide.

He pointed out that 35% of global potential yield is lost due to weeds, pests and diseases, so there is much scope to increase production. “There is potential to see 18t/ha wheat yields with new varieties, we have already seen a record 15t/ha in Australia and some UK growers can occasionally achieve 12t/ha.”

However, while Mr Clark agrees that it is all about producing more food with no extra land, he believes it will be a struggle just to maintain yields in the UK with all the limitations. “We will do well to keep them [yields] where they are now, as inputs such as fertiliser and pesticides, fall and declining water resources.”

One tool unavailable is GM technology. Mr Ivory highlighted that Australian researchers had reportedly developed GM wheat that produces the same yields, but using half the nitrogen.

“Surely GM is going to be a key tool if farming is to meet the expected rise in food demand.”

But it’s not just the research itself, it is how it is used. Mr Clark highlighted that from 1940s to the 1960s, average UK wheat yields doubled from 2t/ha to 4t/ha. And by the 1980s, they had doubled again.

“But since then, progress has slowed down and is hardly rising now.” Mr Clark believes this is mainly due to science not getting applied.

Prof Crute pointed to the erosion of technology transfer over the past 20 years. “We need to put it back together getting people with right skills who can take the latest scientific knowledge from around the world and help put it into practice on farm.”

The HGCA invited growers to have their say on how it should spend their levy on research and development over the next three years.

Craig Meiklem, assistant farm manager at Merton Estates on the Scottish borders believes more money could be spent on disease management. “For spraying, there are so many different chemicals. You always ask yourself: What is the best chemical for this?

“Your distributor and manufacturer always say different things. There never seems to be a right or wrong way to do anything. More money could be spent on research into agrochemicals. That’s where we spend the bulk of our growing costs.”

However, he was surprised that pest management was fairly low on the list of funding 2007-2010 (see box). “You would have thought that weed management would also be higher up there. It’s a huge factor. I’d have expected it to be up much further than harvesting and storage.”

North Yorkshire grower Andy Boothman, who manages 350ha near Malton, added that he would like to see more research into nitrogen and crop protection. “We want higher yields, yet we’re stuck at 10t/ha.”

Mr Boothman also sees weed control as a priority. “We are losing pesticides [through EU legislation] and we are not getting enough new chemicals coming through to give us the choice. We are getting a bit of resistance with Atlantis.”

Suffolk grower Stephen Westlake believes that more money should be spent on research, not less. On the question on how to receive research results, he prefers farm walks and open farm days. “Going out on a farm and seeing things growing is the best way.”