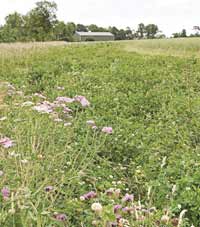 Agri-environment scheme rules need to be reviewed to ensure that working farmers aren’t excluded from applying, according to the Tenant Farmers Association.

TFA chief executive George Dunn has called for a national debate about the aims of agri-environment schemes.

In a statement issued to co-incide with Cereals 2010, Mr Dunn pointed out agri-environment schemes were originally intended to provide funding so farmers could carry out otherwise unprofitable or costly activities for the benefit of the environment.

However, in many landlord/tenant situations it was now the landlord rather than the tenant farmer who was receiving the agri-environment funding, he said.

“The TFA believes that the concept of ‘management control’ needs a fundamental review,” said Mr Dunn.

“Current agri-environment scheme rules allow land owners to pass on scheme conditions through contracts of tenancy whilst taking the full benefit of the scheme themselves.

“Even where tenants are able to access agri-environment schemes we are often faced with situations where landlords are demanding unsustainable rent increases by trying to suggest that the funding being received by tenants should be simply added to whatever profit there is from farming the holding.

“They fail to accept that the payments are to compensate for income foregone and that the extent of the rent increases they are seeking are therefore unjustified.  Landlords agents should be taking more realistic and reasonable approaches in such rent reviews.”

Keep up-to-date with the latest news from Cereals 2010 on our special report page.