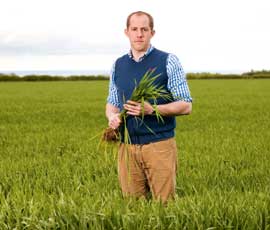 Cereals 2012 event host farmer Alastair Priestley has years of experience of farming the brashy limestone heath just outside Lincoln. That expertise is being fully drawn upon this year as a droughty early spring, followed by torrential rain around T1, piles the pressure on.

From Mere, four miles south of Lincoln, the 1,093ha arable operation is managed across three farms, including the Cereals 2012 site, land rented from the Ministry of Defence and neighbouring farmers for potatoes, and a further 240ha on a range of stubble-to-stubble contracts.

The main driver of success is the stony, free-draining limestone loam, which can grow hefty crops of quality packing potatoes and sugar beet. There are no drains, there is no blackgrass, the pH is 8.0 and there are virtually no slugs. This leads some to dub it “girl’s land”, and Mr Priestley admits the conditions are ideal in terms of establishment and harvesting. However, drought brings serious issues.

“Poor water-holding capacity and variable soil depth can lead to very variable cereal yields,” he says. “Compared with a clay soil where yield may vary from 3.75t/acre to 4.25t/acre from year to year, we are looking at anything from 4t/acre to 2.5t/acre. That brings its own challenges, not least around planning fertiliser inputs.

“We need to err on the side of caution, to prevent nutrient becoming a limiting factor, applying enough for 3.25t/acre, plus an appropriate amount to buffer for conditions.”

With average rainfall of just 600mm/year, and some very patchy seasonal rainfall recently, drought-proofing more of the farm is a priority. A 50m gallon abstraction licence supports current potato land, and a further 230m litre reservoir and pipeline project is planned, subject to 40% grant funding from East Midlands Development Agency.

“It would allow us to move onto fresh potato ground and irrigate beet and maybe cereals too,” says Mr Priestley.

Inherent water holding capacity is also being addressed, by using a considerable amount of muck from the estate’s own 520-sow pig enterprise and nearby poultry units to boost organic matter levels. No straw leaves the farm – one third being incorporated directly, the rest passing through pigs first.

The rotation is dominated by potatoes, with 90ha of Marfona, Saxon and Desiree benefiting from the pig muck fertility and irrigation on owned and rented land. It all adds up to averages of 60t/ha for Tesco and other retail outlets via packing group Branston, of which the Dean family are co-founders and substantial shareholders..

“PCN pressure from years of potato cropping, and uncertainties around the future of nematicides, mean the reservoir can secure the crop’s long-term future by allowing access to new potato land.”

The Holmer harvests about 55,000t from 1,100ha starting a few days before factory opening and running until the end of the campaign. Any more would push up repair costs and depreciation, and jeopardise timeliness, Mr Priestley notes.

Gatekeeper crop recording software is used to monitor variable costs on a per hectare and per tonne basis, for each crop, variety and field. It helped Mr Priestley decide to cut spring cereal cropping. “We could see December, January and February sown wheat was costing us too much, through higher seed rate and wheat bulb fly seed treatment. Those crops were very rarely yielding enough to offset those extra costs, particularly during the past two dry seasons. They just don’t get their roots established and so suffer hugely.” Hence the poppy expansion.

“Gatekeeper really is brilliant for pulling out information, but it is only as good as the information that goes in, so our sprayer operator uses a palm-held device for logging data in the field, so everything is captured at the time.”

Most inputs are sourced through the WoldMarsh Producers buying group, with benchmarking against other co-ops ensuring competitive pricing. Mr Priestley is BASIS and FACTS qualified, so keeps independent agronomist Jim Blaylock on his toes.

“We use new chemistry, but we scrutinise every application.” New SDHI fungicides will be used this spring, at T2. “The dose sensitivity of older chemistry is becoming more of an issue, so we will be using £16,000-worth of product we failed to use on last year’s droughted crops.”

All crops are established following a plough. “We’re still wedded to it,” Mr Priestley notes. “Half our wheat follows roots so we need to remove compaction, and the plough keeps on top of grassweeds, which are only going to become more of an issue as herbicides come under more pressure.”

The eight furrow Kverneland variable-width plough, with 18-inch furrows and working 6 inches down to remove any compaction, can do 16ha a day easily behind a 200hp tractor. That matches the drill system well. “Justifying £50,000 for an additional piece of equipment is not easy,” says Mr Priestley.

The poppies are proving to be a great replacement for the vining peas. “The land was becoming pea sick, there are no fixed contracts available for peas and prices are increasingly volatile. By contrast poppies are on a guaranteed contract for Johnson Matthey and fit very well after late-lifted sugar beet. Their gross margin compares very well with rape and beet.”

The biggest challenge with the 50ha of poppies is weed control. “As a minority crop there just hasn’t been the work done to develop herbicide options, so we are juggling whatever chemicals are available to us.” Post-em Reglone provides the best results, provided timing is right. “If plants are too small or too large it knocks them on the head. So the art is to sow too many seeds so we get the optimum population after weed control.” Harvesting is done by a contractor, using a forager.

Oilseed rape occupies 150ha, all down to Sesame and DK Cabernet this year. Last year the crop averaged 4.5t/ha, up 0.2t/ha on previous years, thanks to favourable conditions at flowering and low stem-base disease.

Equipment is sourced for suitability and value for money. Buying a new Sands self-propelled sprayer last year is a case in point. “I was tempted to go to 36m booms, but opted for 24m, because to be honest boom technology is not there yet to cope with end turns in damp potato fields without putting the boom in the ground.”

Tractors are replaced at 5,000 hours and the combine after five years, with staff fully involved in choosing from a range of alternatives. “They are the ones who will be operating the equipment and sitting in it all day,” notes Mr Priestley.

Servicing and repairs are done on-farm. “We’re not interested in the most expensive equipment, we want the best value. So we’re looking for reliability, minimal breakdowns, and accuracy, without extra cost.”

Mr Priestley backs the Campaign for the Farmed Environment and was pleased to see 54ha of Countryside Stewardship Scheme land successfully moved into an HLS agreement last October. Water management in a large area of grassland was adapted to better attract target bird species. “We’ve introduced cattle onto the area, because they graze and poach the land in a way that suits wetland bird species. We’re effectively farming birds, so we need to get the system right.”