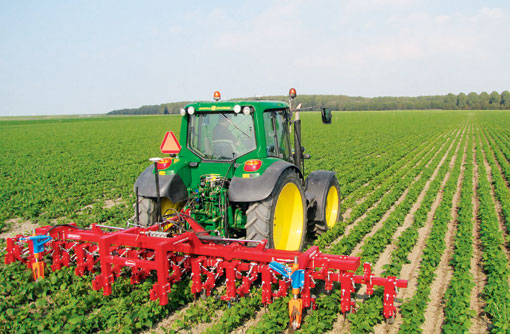 The main themes emerging from the implements on show this year are increased productivity and versatility, particularly with regards to cultivations and drilling. So why not venture away from the perfectly polished exhibits of the machinery lines to see equipment innovations hard at work on 10ha of demonstration plots.

Agrisem advocates using cultivation and sowing elements – such as the Combiplow subsoilers, seed coulter units and hoppers – that can be used individually or together.

“The seed hoppers have stainless steel metering units – good for placing fertiliser – and are tractor – or implement-mounted units,” Mr Manfield points out.

Options being demonstrated include a 4m Combiplow, which can be had with Tillso Sabre chisel wing points, and the Combi-O-Sem disc coulter seeding unit for rapeseed sowing rather than scattering from a cultivator or subsoiler.The Tri-O-Sem range of tined direct sowing units can be built up with different hoppers, disc cultivation elements and packers into a number of mounted or trailed configurations.

“The Bourgault coulter point fitted to this implement puts seed on shelves either side of a row of fertiliser placed a little deeper where it is available to give the young crop an early feed,” Mr Manfield points out. 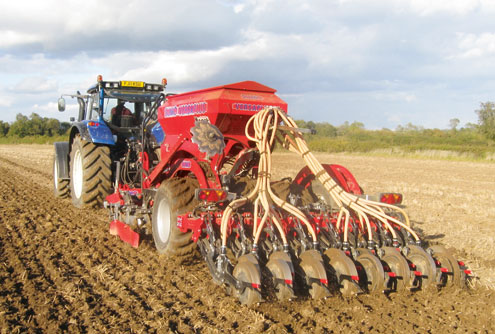 Sumo’s Versadrill is being replaced by two newcomers that continue to use the System Moore disc coulter mechanism, but in different ways.

The Versaplus making its working debut at Cereals will be joined later by a 6m Sumo Unidrill – an interpretation of the Moore implement of the same name.

“While the Versadrill is good in the right conditions, it is limited when it comes to situations other than direct drilling,” says drill specialist, Marcus Ainley. “We’ve decided to take a different approach – produce a drill that’s suited to different non-direct sowing conditions and also one that’s a dedicated direct drill.”

There are front-mounted soil loosening legs on the Versplus, but with trash-cutting straight discs in front of them, and the Moore coulter assemblies are positioned at the back of the machine instead of beneath the hopper. This leaves room for a disc cultivation unit ahead of a row of large diameter rubber tyres.

“The two rows of discs, similar to those on the Trio, provide surface cultivation with the packer/transport tyres firming the surface ready for the disc coulters, which are mounted on parallel linkage individually, rather than in pairs for added flexibility,” explains Mr Ainley.

As with the current machine, the Versaplus is easily adapted to sowing oilseed rape by inverting blanking-off plates in the seed distribution head that correspond with the outer two rows either side of each soil loosening tine.

“That leaves only the inner two sowing seed right alongside, effectively in a band, where the soil-loosening effect of the tines provides ideal conditions for deep rooting,” Mr Ainley points out. 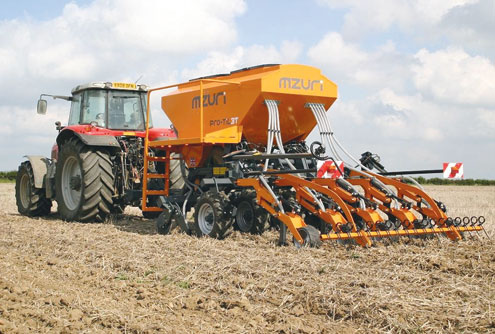 The static launch of the Pro-Til strip tillage direct drill is being followed this year by demonstrations of the newcomer.

Pro-Til 3m mounted and 4m trailed units will show how the seeder strip tills stubbles rather than cultivating over the full width to leave crop residue on the surface, retain moisture and organic matter to encourage worm activity for natural drainage and aeration.

Developed after farmer-engineer Martin Lole concluded he spent too much time pulling up ground and knocking it down again on his Worcestershire farm, the seeder has rearward inclined soil-loosening tines across the front designed to work at or just beyond plough depth.

They are shaped and angled to clear surface trash, and equipped with winglets to loosen a strip of soil without inverting it or bringing up significant clods.

“The objective is to produce a clear, cultivated strip of soil with minimal moisture loss, which is then consolidated by a rubber tyre,” Mr Lole explains.

“Seed is then sown in 125mm-wide bands using a tine coulter coupled to a zero pressure press wheel.”

The parallel linkage that forms the coulter arm is a key design feature because apart from being allowed some lateral movement to minimise stresses when working through curves, it keeps the band sowing tine at a constant angle. It also exerts downward pressure through a hydraulic cylinder to maintain the required sowing depth regulated by the adjustable press wheel.

“Centre-to-centre band spacing of 333mm on 3m models and 363mm on the 4m version results in an open canopy that discourages a micro-climate favourable to foliar disease – a concept I learned from organic growers,” says Mr Lole. “At home, we run a straw rake through stubbles to spread the chaff and chopped straw, and encourage grass weeds to chit so they can be sprayed off once or twice as necessary before a single pass with the Pro-Til.”

He claims crop establishment savings of more than £100/ha, increased yields in dry times and a noticeable improvement in soil structure. 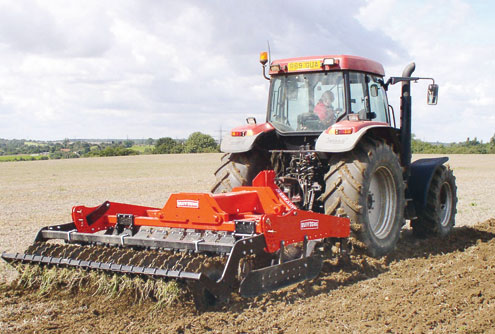 The Saturn’s tines are arranged to loosen soil across the full width: “The ‘bent’ legs are arranged in two rows, one behind the other, angled left and right,” explains Ben Clowes. “That makes the implement easier to pull but still giving full-width soil movement.”

The 3m model is easily handled by a 110-130hp tractor when set to cultivate relatively shallow at 15-20cm and the two rows of wavy-edge discs at the back chop any clods and level the surface with some firming action to leave a drill-ready tilth.

“Growers who want to loosen soil to greater depth at the same time, to improve drainage and rooting for oilseed rape, can add the Quivogne SCD subsoiling unit to create the SaturnPlus,” Mr Clowes adds.

Deep soil loosening is an integral feature of the Pluton since it comes with a staggered row of tines capable of working down to 40cm. Tine spacing is adjustable so users can remove or add tines if necessary.

Two rows of 560mm serrated discs on individual rubber block suspended arms come next to cultivate the surface into a tilth, then a choice of three different finishing tools to suit different soils.

Quivogne’s 660mm diameter Rollcrest packer has a sharp profile to slice and press clods and a notched edge to maintain rotation; the RollPro is similar, but with more pronounced shoulders each side of a notched rib to produce a firmer pressed finish.

“Finally, we have a Güttler press made from synthetic material that saves more than half a tonne in weight and produces a weather-proofed finish,” Mr Clowes adds. 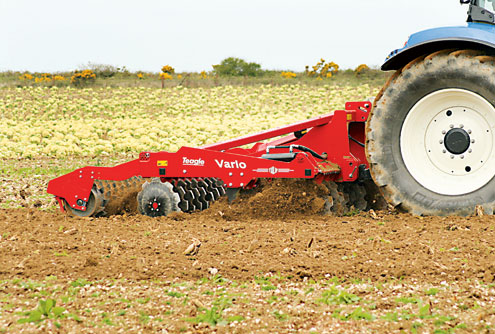 Surface cultivation and deep soil loosening are also performed in one go by the Multidisc Vario, being demonstrated in new sizes by Teagle Machinery.

“This implement has unique flexibility in being able to work with or without the subsoiling tines at the touch of a button,” says Tom Teagle. “Now, we’re able to cater for more growers and different size tractors by introducing a 2.5m mounted version and a 4m folding trailed model.”

The Multidisc Vario differs from other tine/disc combinations in having its rigid tines located between rather than in front of the two gangs of 560mm discs. Pin and hole adjustment allows working depth to be set from 2.5cm below the discs to a maximum of 30cm.

“This configuration produces a nicely balanced implement that isn’t dragged down at the front by the tines,” explains Mr Teagle. “Users also like the way the leading discs cut through surface trash ahead of the tines, leaving the rear discs to complete the mixing process.”

In addition to providing pressure-adjustable auto-reset leg protection, the hydraulic cylinder on each tine is used to retract it where subsoiling is not needed.

“Not all areas of a farm, or even within the same field, require the same cultivation approach,” Mr Teagle points out. “This implement can go from preparing land for deep-rooted crops with the tines in work all the time to a different situation where they are not needed.

“In another scenario, the tines can take out tramlines but not get used across the rest of the field to reduce draft load and fuel consumption,” he adds. “The implement will remove deep ruts after brassica harvesting while the discs incorporate crop residues faster and more cheaply than using a rotary tiller.” 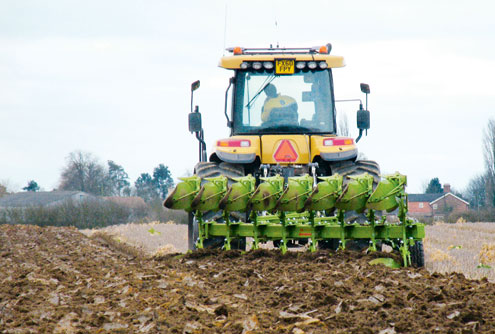 A bigger version of a Dowdeswell best-seller caters for larger tractors. The 145 Series MA being demonstrated at Cereals 2012 can operate in-furrow behind a wheeled tractor or out of the furrow on a wheeled or tracklaying power unit of up to 350hp.

“Until now, this plough has been limited to a maximum of seven pairs of bodies from a 6+1 configuration,” notes technical manager Jason Stringer. “But as the size of tractors keeps increasing, we have to keep pace so we now have a seven-furrow main frame that can be extended to eight furrows.”

A re-designed headstock has the lower linkage mounts separate from the cast lower section of the assembly; that way, either Category 3 or Category 4 mounts with 50mm pins can be installed.

The newcomer displaces the 155 Series, which reached eight-furrows with a 6+1+1 configuration, and the on-land only 150 Series.

A new simple-spec plough is also on the way to succeed the familiar DP7 with a design that is easier to set-up and adjust.

“Hydraulic parallel linkage front furrow width adjustment and turnbuckle beam alignment will be available,” says Mr Stringer. “Bolt-on leg brackets give a choice of fixed 14in or 16in furrows.” 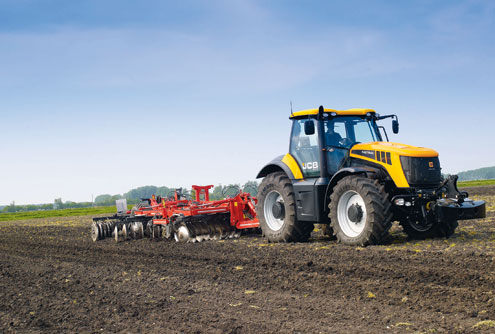 The Sisu-engined mid-range 3000 Series Fastrac gets its debut workout at Cereals.

Power outputs for the 3200 Xtra and 3230 Xtra are unchanged at 195hp and 230hp for draft work, but there is more torque available to handle draft implements and heavy trailers.

With selective catalytic reduction (SCR) used to regulate exhaust emissions, an optimised combustion process is said to deliver up to 10% lower fuel costs, even after the cost of AdBlue diesel exhaust fluid is taken into account.

“We still have power boost to call up an extra 40hp for quicker acceleration and sustained speeds uphill during transport work,” says Ed Roach, of JCB Agriculture. “And operators can still switch off this feature when running empty to save fuel.”

The tractor’s P-Tronic semi-powershift transmission has six powershift speeds in each of the four ranges and manual, auto field and auto road shifting options. Xtra-Drive means only the brake and accelerator pedals are needed to stop and start (at a road junction, for example) – intelligent controls look after the transmission clutch.

New features are Traction Assist, which prevents the inner wheel spinning away during a tight turn over rough ground, and Hill-Hold, which automatically releases the brakes when pulling away up an incline.

Fans of auto steering will welcome factory-installed infrastructure; it’s optional on the mid-range Fastrac machines and standard on the 280hp and 306hp 8000 Series tractors that will also feature on the Cereals event demo plot.

Auto guidance and steering – as well as the attractions of Isobus implement control – will be featured by LH Agro.

“Growers who cut their teeth with lightbar guidance and moved on to auto steering with 10cm accuracy are now progressing to RTK for greater accuracy and repeatability.

“We now have 37 base stations across the south of England, either for individual farmers’ use or as part of a co-operative scheme serving up to 10 farming businesses,” he adds. “It’s a good way of sharing the investment in the fixed equipment involved.”

Operators enjoying the benefits of RTK auto steering can also tap into Isobus technology if they have a compatible display terminal such as the Topcon X30, which is now available with new software to handle a range of precision farming and implement control functions.

These include variable rate application and boom section switching guided by GPS, as well as Isobus control of implement functions using a common display layout.

“This approach avoids control box clutter and gives the operator access to implement functions through the colour touch-screen display of the X30,” explains Mr Reed.

“As more tractors have Isobus-standard electronics and there are more implements with job computers for the display, the more widely accepted this technology will become.”