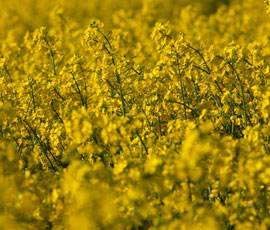 The point at which oilseed rape reaches saturation in arable rotations was questioned by HGCA senior analyst Jack Watts at Cereals 2012.

Mr Watts, who confirmed that oilseed rape plantings are up 6% to 700,000ha this harvest, said as growers operate tighter and tighter arable rotations there is an increased fear of “oilseed rape sickness” as disease and volunteers encroach in to crops.

The boost to oilseed rape is being driven by the crop’s price and increasing profitability, which has come on the back of several disappointing European harvests and subsequent market shortages, said Mr Watts.

“Britain is now, for the first time, an exporter of oilseed rape.”

For many producers, oilseed rape is becoming the main crop rather than the break crop. Wheat plantings are up slightly this harvest, but unlikely to breach the record two-million-hectare plantings of 2008, when set-aside was reduced to zero now or in the near future, he said.