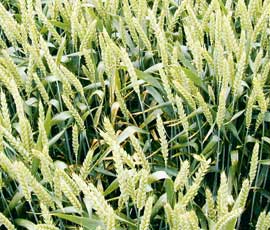 The days of a triazole-only approach to disease control programmes are over, according to Velcourt technical director Keith Norman.

Extensive trials by Velcourt this year, which were on display on a smaller scale at Cereals 2012, have been comparing all the available SDHI chemistry to each other and their triazole foundation of either epoxiconazole or prothioconazole.

The wet spring has provided Septoria tritici with ideal conditions to spread throughout the canopy, and with spray days few and far between, the efficacy of the chemistry being applied is vital in protecting yield, said Mr Norman.

And as septoria has not really been an issue for the past four years, this is the first time the SDHI chemistry has truly tested under high disease pressure conditions.

“There is definitely a shift in terms of efficacy with all the triazole products and we haven’t seen septoria like we are seeing this year for a long time,” said Mr Norman.

“I think what has happened is that selection pressure has been going on that we were not aware of, and we have come to a really wet spring where this disease is having a field day and we are seeing a lot less sensitivity to triazoles than ever before,” added Mr Norman.

Velcourt’s trial plots at Cereals included the new SDHI active ingredient penthiopyrad from Dupont, which should be commercially available for spring 2013.

It was partnered with a three quarter rate of prothioconazole for the sake of the experiment, as the company has not yet announced whether it will be available as a straight within a formulation.

Each product was applied at both T1 and T2 at three quarters of the label rate, and visual differences were stark.

“Thank god that we have the SDHI’s because they couldn’t have come at a better time,” said Mr Norman.

“In both the straight prothioconazole and epoxiconazole applications, septoria can be seen right the way up the plant and on to the flag leaf, so a triazole only approach is over.”

All the SDHI products showed superior disease control, with no visible active septoria lesions on the flag leaves, although there are subtle differences, he said.

“But it must be remembered that Aviator Xpro has a far superior formulation, as we have just mixed and matched straight penthiopyrad with Proline.

“Dupont’s active looks like a good product for septoria control, certainly better than Seguris which is stronger in rust situations,”said Mr Norman.

In the other corner, where BASF’s Adexar and Syngenta’s Seguris were fighting it out for superiority in the epoxiconazole co-formulations, Adexar had provided far better disease control right the way to the base of the plant after the two applications, and also looks the cleanest of all the products combined, he said.

With price differences between the available products, Mr Norman said that it was very difficult to draw conclusions on cost benefit. “In the last couple of years we haven’t had the yield responses in trials from these products,” said Mr Norman.

“But in this high disease pressure year we won’t need to see much of a response, with grain prices as they are, to cover the costs of using them,” he concluded.