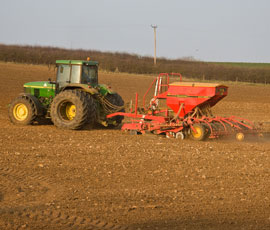 Too many growers are struggling to vary seed rates within fields as effectively as they could, not only squandering worthwhile yield rises, but also failing to keep the pressure on blackgrass.

Accurately matching seed rate to soil and establishment conditions should lie at the heart of precision farming, said Matt Ward of Rootplanner Precision, a division of Farmacy, the independent agronomy arm of distributor Hutchinsons.

Yield responses of 0.3-0.5t/ha in wheat, thanks to a more appropriate plant population across the field, plus up to 60% blackgrass suppression, have been achieved from the service, which is already used on 15,000ha.

“Too often farmers are using precision farming to vary nitrogen rates to correct establishment problems, because they didn’t get seed numbers right in the first place. Nitrogen should be a subtle variation for good nutritional reasons, not a compensation for poor establishment,” he advised.

Attempts to make manual adjustments to seed rates according to soil conditions often fail to go either high enough, or low enough. Field checks show establishment rate can vary from as much as 96% to as little as 54%, a much greater range than most growers allow for.

“Growers might go for a headline rate of 500 seeds/sq m to increase competition, because blackgrass is so awful, but in poorer seed-bed conditions that is nowhere near enough. I’m not saying rates should exceed 500 seeds/sq m across the field, but they do need to be meaningful enough to compete effectively in blackgrass patches.”
Matt Ward

There are blackgrass implications too. “Growers might go for a headline rate of 500 seeds/sq m to increase competition, because blackgrass is so awful, but in poorer seed-bed conditions that is nowhere near enough. I’m not saying rates should exceed 500 seeds/sq m across the field, but they do need to be meaningful enough to compete effectively in blackgrass patches.”

He urged growers to use soil maps to split fields into smaller management zones, compiling digital seed rate maps in the farm office according to soil potential, so drills can vary rates automatically across the field.

For best results, maps are based on farmer and agronomist observations, complemented by publicly available aerial imagery, such as Google Earth, and a 5m resolution satellite-based soil brightness scan provided by Courtyard Partnership, before an experienced soil scientist visits to create a final soil map.

“Soil mapping ties in extremely well with blackgrass development, making it possible to tailor seed rates to help crops compete where conditions are difficult, reducing blackgrass seed return by up to 60%. That is a valuable tool to help reduce our dependency on herbicides.”

Take account of sub-soils too, he said. A chalky free-draining sub-soil can be blackgrass free, whereas a poorer draining sandy clay sub-soil can compromise seedbed condition, raising blackgrass risk.

Significantly, seasonal factors, such as slug damage, are disproportionally worse on the most difficult soils too, adding to the need for tailoring rates accurately.

Cost of the service is £8.50/ha for the initial one-off soil map, then £4.50/ha per season for the on-line toolbox to create application maps. “That’s significantly less than the value of a typical 0.3t/ha yield response.”

In winter barley, spring cereals and break crops, which all struggle to compensate for poor establishment, responses have been even better.