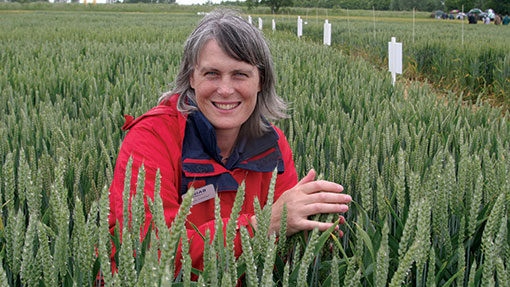 Picking five top varieties from the many winter wheat, barley and oilseed rape varieties on show at Cereals is no mean feat. Louise Impey puts the experts from NIAB TAG on the spot.

Selecting only 15 varieties from the full range of combinable crops that will be on show is difficult given so many older varieties continue to perform very well, say variety experts.

The HGCA Recommended List for winter wheat, for example, has a whole host of good varieties, across all Nabim groups. Differentiating between them is a real challenge, says cereal crop specialist Clare Leaman of NIAB TAG.

“The varieties [I have] highlighted are amongst the newer ones,” she explains. “There’s less known about them, especially if it’s very early in their commercial life.”

That’s why the top two sellers – JB Diego and KWS Santiago – aren’t in this selection. “They have done everything growers have asked of them and will continue to do so. But people know how to grow them and what to expect.”

She also admits to a heavy bias towards feed wheats, which is why there are no Group 2 or 3 varieties, despite new additions to both sectors. “But they will feature on farms. This is by no means an exhaustive list.”

A new Group 1 milling wheat is always of interest. One that offers high yields and orange wheat blossom midge resistance is particularly good news, says Mrs Leaman. Rated 102 for yield, RAGT’s Skyfall has a 4% advantage over Crusoe and good disease resistance. “This will make it of immediate interest to Group 1 growers.”

“It’s a high yielding, lower protein type, so growers will need to manage it accordingly.” Providing it is not drilled too early it is a serious contender, she believes.

The new hard Group 4 feed wheat Evolution, from Limagrain, is also worthy of attention, she suggests.

“What Evolution brings is very high yields and good disease resistance, especially to the rusts.” That makes it the perfect variety for spreading risk, without incurring a yield penalty. “It will partner some of the other feed wheats very well.”

It is a later type with a low specific weight, similar to many other feed wheats, she notes.

The yield potential of KWS Kielder is too good to ignore, highlights Mrs Leaman.

At 107, it heads up the hard Group 4s and will appeal to growers who want to push for yield. “It is a high input choice, but that hasn’t put people off in the past. And it has orange wheat blossom midge resistance, which Evolution lacks.”

It is susceptible to yellow rust and mildew, and is another later maturing variety with a low specific weight.

Agrii’s Dickens has been chosen by Mrs Leaman for similar reasons to Evolution. No yield penalty and the ability to spread yellow rust risk appeal, as does its usefulness as a partner variety.

“Dickens joined the Recommended List in time for 2013. It’s another very high yielding variety, at 106, but it’s not as late maturing as others and has better specific weight. “It is a good variety to offset risk.”

Leeds from KWS was recommended for 2013 as a soft milling Group 4. At 105 it is very high yielding as well as being suitable for distilling and export markets.

“It has a good specific weight and good fusarium resistance, which distinguishes it from others.” It also has orange wheat blossom midge resistance. 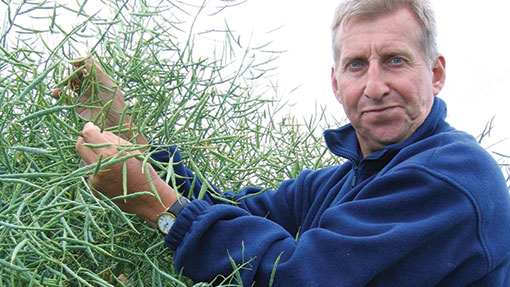 Even so, the two top selling varieties, DK Cabernet and PR46W21, now account for a quarter of the market. “These two have been consistent and are still strong contenders. They are the key reference points for any new conventional or hybrid varieties.”

DSV’s hybrid Incentive has taken top spot on both the East and West region and the North lists, which is quite a feat, showing its broad UK adaptation, notes Mr Kightley.

Lodging and stem stiffness scores are good. “It is relatively tall, with the high biomass we expect from hybrids. It is early flowering and medium maturity.”

Disease resistance is nothing special, he warns. “It has a six for light leaf spot, which is reasonable, but a four for phoma. So growers will have to pay attention to autumn fungicide programmes and be prepared to spray twice.”

KWS’s new conventional variety, Charger, stands out as a low biomass choice with performance equal to the best hybrids at 105, says Mr Kightley.

“Growers will want to try it. It’s an easy variety to grow, of the type they enjoy. Short, low biomass varieties make a big impression on farmers.”

Standing ability is excellent, with very early flowering and medium maturity. “It can re-flower if it gets hit by frosts, so it’s a good partner to DK Cabernet, which is late flowering. Together, they offer a genetic approach to coping with the weather.”

Charger’s very good 2012 trials performance showed the advantage of its excellent lodging resistance in a very difficult season, he continues. “Its disease resistance isn’t good, with fours for both light leaf spot and stem canker, so don’t cut back on fungicides.”

Just 1% behind Charger is Trinity, a conventional variety from Elsoms. Significantly taller, it hasn’t the same stem stiffness. “But it has better stem canker resistance, rated six,” says Mr Kightley.

A very good performance in its critical candidate year saw Trinity top the 2013 trials. “It is still early days for all the new additions, and there will be some settling down of scores and ratings, which could work to Trinity’s advantage.”

With a gross output of 103, the excellent stem canker resistance hasn’t translated into a yield advantage, but gives growers assurance in a wet autumn, he believes.

“It is a typical hybrid, being taller and with more biomass,” he says. “But it has good lodging resistance and stem stiffness and is early flowering and reasonably early to mature.”

In the north, Limagrain’s conventional variety Anastasia is only just behind Incentive for gross output, at 106.

A short, low biomass variety with medium flowering and maturity, it is showing an improving yield trend and could have more to offer, predicts Mr Kightley.

“High rainfall in the north means growers don’t want excessive height,” he explains. “So a shorter plant type, which also has good lodging and stem stiffness scores, should be viewed favourably. We have included it in our own variety trials this year, to re-examine its possible suitability for more southern areas.”

Senova’s Talisman is the highest yielding winter malting barley at 101, but is still to gain full IBD approval. “Approval should be through by Cereals, so growers will know whether it’s one to consider,” remarks Mrs Leaman. It is early maturing, with resistance to common strains of barley mosaic viruses and good disease scores. “It’s a good example of the progress we’ve seen in barley breeding.”

Syngenta’s SY Venture is fully approved for malting and just 1% behind Talisman on yield. “The maltsters have already indicated they like it, so this is a safe bet.” It is short for a malting variety, so has good resistance to lodging, and matures early.

The highest yielding two-row feed type KWS Tower is a new addition for 2014-15. “There are some excellent two-row feed varieties, which only vary on disease resistance,” notes Mrs Leaman.

“So that’s what growers should look at when choosing.” KWS Tower is susceptible to net blotch, and Rhynchosporium and mildew ratings are moderate, she notes.

Another newcomer for 2014-15, Tetris from Syngenta, is also susceptible to net blotch but has excellent resistance to Rhynchosporium. Specific weight is slightly lower.